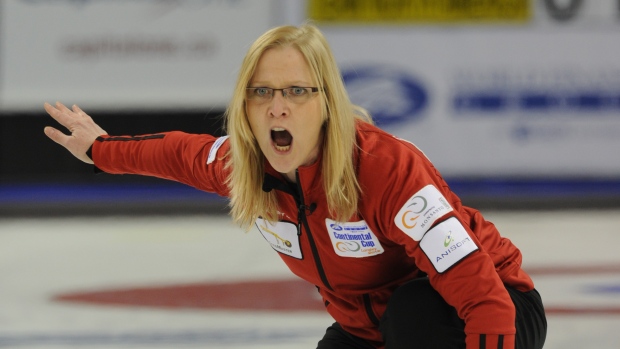 There have been a lot of moving parts on Team Scheidegger this season, and that fluidity will continue into the New Year.

With skip Casey Scheidegger due to give birth to her second child over the coming days, the Lethbridge, Alta., team has had to juggle its roster and use some substitute players.

Kristie Moore moved from lead to skip at the team's season-opening bonspiel in Edmonton with fifth Susan O'Connor throwing first stones. Cheryl Bernard subbed in for Scheidegger at the next World Curling Tour stop in Calgary, guiding the team to the final before falling to Kerri Einarson.

Scheidegger attended both events and enjoyed the different perspective despite the frazzled nerves that came with watching instead of playing. Curlers had microphones on so she was able to listen to their discussions during the action.

"It's so interesting for a skip because we're so isolated down at the other end," she said. "We often don't get to hear what our teams are talking about. So that was a really cool learning experience for me to hear what the conversations sounded like. It's something we've been working on — our communication — so to be able to solidify my understanding of what they're talking about at the other end was really helpful."

Amber Holland, the 2011 Scotties champion, was a substitute skip at the Masters last month in North Bay, Ont., and she'll return for this week's Tour Challenge in Pictou County, N.S. Bernard, a 2010 Olympian, is tabbed to return at the Canada Cup this month and play at next month's National in Conception Bay South, N.L.

"I think we've made some really good choices in Amber and Cheryl stepping in for me," Scheidegger said. "They have a wealth of experience. We really wanted to take this opportunity to learn from them, myself included. I've been in contact with both Amber and Cheryl and it's been a good learning experience for me and I know that the girls are learning lots too.

"But I think it also makes us all appreciate each other a little bit more. It's been challenging but we're making the best of it and really using this to learn from and to grow greater appreciation for our teammates."

Bernard, who retired from the tour in 2014 but still curls regularly, said she got a boost after making a draw to the button for the win in her opening game with the team.

"That really made me happy and I kind of built on it," she said. "I made some great last-rock shots and then I have an incredible team throwing in front of me. I was just a helicopter skip. I fly in, I don't have to do a lot of work, I play and out I go. I loved it."

With Scheidegger planning to come back in January and Haughian expecting in March, Bernard and O'Connor are tabbed to be on the sidelines for the team at the Jan. 22-26 provincial playdowns, Scheidegger said.

Scheidegger won the 2018 Alberta championship and returned to the Scotties Tournament of Hearts last year as Team Wild Card. Her lone Grand Slam title came at the 2017 Canadian Open.

"Definitely we feel like we have the potential and we're still learning, we're still growing," she said in a recent interview from Lethbridge. "We're definitely a team that feels like every time we're on the ice, there's something new to learn.

"We're always trying to improve ourselves. That's part of the reason why I think the four of us work so well together."

Bernard, who has watched the team from the broadcast booth in recent seasons, said she was impressed with the team's skillset.

"I don't think I realized how good they were mentally and physically, like how well they throw the rock," she said in a recent interview in Toronto. "The one thing I'd say with them is they need to believe how good they are.

A whopping 62 teams are entered in this week's Tour Challenge on the Grand Slam of Curling Tour.

The event is split into two tiers with 31 rinks on the men's side and 31 on the women's side.

The Tier 1 draw at the Pictou County Wellness Centre boasts the elite rinks from the World Curling Tour. Tier 2 competition includes teams ranked a little lower and some rinks from the local region.

The Men of Curling calendar is going global again this year.

Japan's Tsuyoshi Yamaguchi, American Korey Dropkin and Scotland's Bruce Mouat are the international entries featured in the 2020 edition, a joint project from The Community Fundraiser and George Karrys, the former publisher of The Curling News.