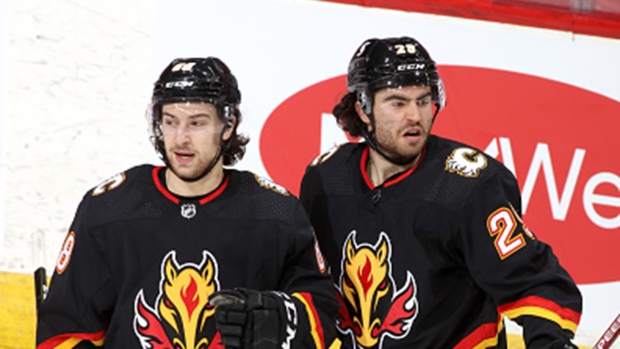 The Calgary Flames are set to begin a condensed four-game series with the Vancouver Canucks beginning Thursday to close out the season, but a pair of Flames forwards won’t be heading home after 2020-21 wraps up.

After their team’s season ends, Dillon Dube and Andrew Mangiapane will fly out to join Team Canada at the IIHF World Hockey Championship in Latvia.

Power, a defenceman playing with the University of Michigan, was the unanimous No. 1 prospect in TSN's mid-season draft rankings released last month. Perfetti was selected 10th overall by the Winnipeg Jets in the 2020 NHL Draft. He had nine goals and 17 assists in 32 games with the AHL's Manitoba Moose this season.

“It should be fun. I think it’s an honour to be putting on the team Canada jersey. I’ve never done anything like that before, this is my first time even going overseas. The opportunity was there and I just felt me being a young guy, just having to take the opportunity and have some fun with [Dube],” Mangiapane said.

While Dube is every bit as honoured as Mangiapane, he said their focus remains on the games against the Canucks before looking too far ahead to team Canada.

“I wasn’t really expecting [a phone call from Hockey Canada] to be honest and that day I was a little disappointed with getting out of the playoffs and that’s kind of all my mind was on,” Dube said. “But it’s an honour every time you get a call from Hockey Canada and I’m honoured to even have that opportunity. But for me right now, I think I’m really focused on these four games and finishing off really strong with this group and then flipping my mind to wearing that jersey and getting ready to go in that tournament.”

Flames teammate Nikita Nesterov will be suiting up for Russia in the tournament and, as TSN’s Salim Valji reports, more announcements could come before the NHL season wraps up.

As for having Mangiapane heading over with him, Dube said it will be nice to have a familiar face in Canada’s dressing room.

“It makes it a lot easier going over knowing someone. With World Juniors and everything you kind of know everyone, they’re around your age, you play with them basically your whole life going through it,” he said. “Going to this, I don’t really know many guys, so to have [Mangiapane] will be really nice. We’re really close, too, so to kind of go through it with him will be good, but I know out mindset right now is these four games and we’ll be able to kind of be able to talk about it more and enjoy it together.”

The Worlds will take place from May 21 to June 6 with Canada scheduled to play host-nation Latvia to open their schedule.