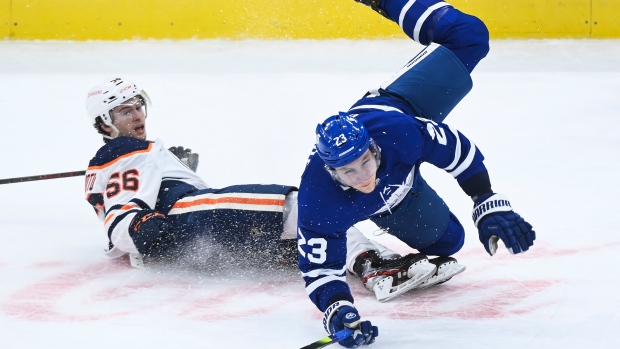 TORONTO — The Maple Leafs expected Wednesday’s game against Edmonton to be a high-flying showcase of both teams’ offensive talents, but in the end it was a defensive showdown that Toronto lost 3-1, leaving much to be desired ahead of Friday’s rematch.

“I didn’t like our game at all today. I thought we were really slow and disjointed, didn’t play with enough pace to generate any sustained pressure on offence,” said head coach Sheldon Keefe. “Couldn’t draw power plays, took some careless penalties ourselves, and that ends up being the difference in the game.”

Not only did the Leafs lose out on two points after winning two straight games, they also lost Joe Thornton to an injury in the third period that Keefe said will “definitely” cause the veteran to miss time. Thornton was crunched into the boards by Josh Archibald early in the final frame, and left swiftly while cradling his left arm. That left Toronto with just 10 forwards in the game after Keefe opted to dress seven defencemen for the tilt.

“We don’t know the extent [of his injury],” Keefe said. “He’s going to have to get more tests and images done later this week.”

While the final outcomes of Wednesday’s game were disappointing for Toronto (3-2-0), the night started out at a faster paced than it ended, with chances being traded at both ends of the ice. But it was a series of unfortunate events by the Leafs that led to the night’s opening goal.

Past the halfway point of the first period, Jimmy Vesey made an awful pass through Frederik Andersen’s crease that went off Jake Muzzin’s skate, hit the post and redirected behind Andersen. Kailer Yamamoto was credited with the goal, and the Oilers’ second shot on goal of the game, to make it 1-0 Edmonton.

After that, all action slowed to a crawl. What had been billed as a potential track meet morphed into a defensive grind, with the Leafs looking especially determined not to make a misstep against the Oilers’ potent superstars Connor McDavid and Leon Draisaitl. But in the process of containing both players to that stage of the game, the Leafs lost their own way.

“They're extremely dangerous but we can't get away from our game,” said Auston Matthews, Toronto’s lone goal scorer of the night. “We got to go out there and play our game and try to produce offence. We have to play to win, not play to [slow down] two guys.”

A power play chance for Toronto late in the second period did have the Leafs briefly buzzing again, but Wayne Simmonds hit the post on his opportunity and Matthews whiffed on an open net to rob the Leafs of an equalizer.

Keefe started the third period by shuffling his top three forwards lines, right before Thornton was taken out by Archibald. That’s when the suddenly undermanned Leafs finally found their scoring touch, with Matthews slipping a short side strike past Mikko Koskinen to tie the game 1-1.

“I thought he worked, I thought he did a pretty good job,” said Keefe of Matthews. “But I thought all our guys were really disconnected today. When Auston had success, it was very individual. He created the takeaway, he attacked the net. We didn’t do much together with any connection, from our zone out to the neutral zone to the offensive zone.”

And the reprieve Matthews brought the Leafs would be short-lived at that. Right after his goal, Muzzin was called for tripping, and Draisaitl pocketed his first goal of the season on the ensuing power play to give Edmonton a 2-1 lead. Archibald’s empty-netter would seal the win for the Oilers.

Matthews finished the night with a goal and six shots on net in over 24 minutes of ice time primarily against Edmonton’s top line, while Draisaitl and McDavid combined for two points and eight shots in the Oilers’ victory.

Had the Leafs won, Matthews might have taken more satisfaction in holding two of the league’s best scorers mostly at bay. But that was far from the case on Wednesday.

“We were just too safe,” Matthews said. “We have to go out there and make plays. We’re going to make mistakes, you want to try to limit those, but we still have to go out there and play hockey and play to our strengths, try to create offence and play to win, not play to lose. I don't think our forechecking was good enough tonight either and we made it easy on them to break the puck out.”

Toronto won’t have long to sit on the loss at least, with another contest against Edmonton (2-3-0) looming on Friday.

“We have to regroup as a team,” stated Matthews. “That was a pretty underwhelming game, not much really going on. We really didn't do a great job through the neutral zone and we couldn't really get much going and not a whole lot of offence in this game. Not really expected but we definitely got to do a much better job of creating offence.”​