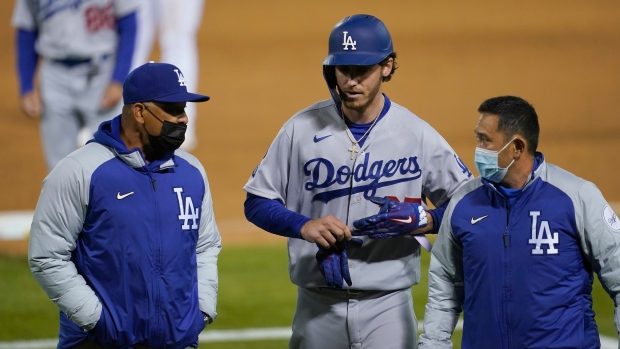 The World Series champions made the move Friday before Bellinger and his teammates received their championship rings ahead of the Dodgers' home opener against Washington.

Bellinger was accidentally spiked by Athletics reliever Reymin Guduan on Monday while beating out an infield single in the ninth inning of the Dodgers' 10-3 win in Oakland.

Dodgers manager Dave Roberts said they had not seen “significant” improvement in Bellinger's leg since the injury, but the outfielder was already jogging and moving. He missed the final two games of Los Angeles' series in Oakland.

“All the tests say it’ll be a short-term missing of time rather than a long-term, which is great news all around,” Roberts said.

Bellinger batted .211 with two RBIs in the first four games of the season. He is eligible to return April 16 when the Dodgers open a series in San Diego.

Mookie Betts also wasn't in the starting lineup for the Dodgers' home opener against Washington due to back stiffness, but Roberts thought the former AL MVP could be available to pinch-hit. Betts was scratched from Wednesday's game in Oakland.