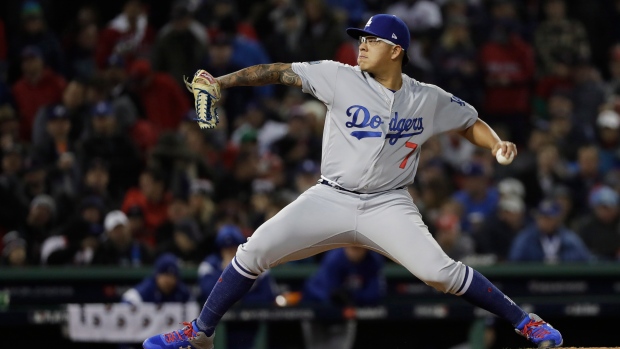 Urías was placed on leave while MLB officials looked into his May 13 arrest for investigation of misdemeanour domestic battery. Police said Urías was taken into custody in the parking lot of a Los Angeles shopping mall but police did not release details.

Urías addressed his teammates for about five minutes in the clubhouse before the series opener at Tampa Bay. Manager Dave Roberts and president of baseball operations Andrew Friedman also were present.

"I think his demeanour is he's happy to be back. He's anxious to get everything behind him," Roberts said. "I know he's excited to just get back to playing baseball — obviously all that's been going on in his life, and getting him back here and focusing on baseball when he's at the ballpark, and just giving him the support that he needs at this point in time."

"They run an extremely thorough process, and after going through it, they made the decision to reinstate," Friedman said. "It's tough for us to elaborate much right now, but one thing we do know is it's not standard for them to reinstate after just the seven days, so that says something to us. We hopefully will know more in the next couple of weeks."

MLB and the union agreed to a domestic violence policy in 2015, giving the commissioner the right to investigate and impose discipline.

Urías, a 22-year-old left-hander from Culiacan, Mexico, began the season in the starting rotation but moved to the bullpen when Clayton Kershaw returned from the injured list.

Roberts didn't rule out Urías from pitching Wednesday night in the series finale with the Rays. He said the Dodgers "certainly expect him to be a factor in that Pittsburgh series" that starts Friday night.

To make room on the roster for Urías, Los Angeles optioned outfielder Kyle Garlick to Triple-A Oklahoma City on Tuesday.