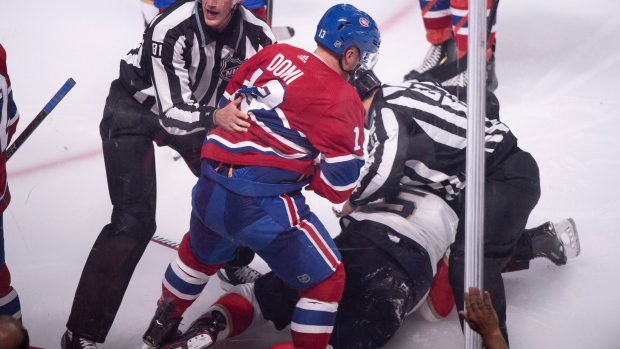 Montreal Canadiens forward Max Domi had a hearing on Thursday afternoon with the NHL's department of player safety following his sucker punch on an unsuspecting Aaron Ekblad.

Montreal’s Max Domi will have a hearing tomorrow for roughing/ punch to an unsuspecting opponent against Florida’s Aaron Ekblad.

According to TSN Hockey Insider Pierre LeBrun, the hearing was scheduled for 12:30pm et.

Domi was given a match penalty for punching Ekblad in the nose in the third period of Wednesday's pre-season game between Montreal and Florida, which the Panthers won 5-2.

Ekblad left the game, at the league's request, and did not return. He went through tests after the game and has since cleared concussion protocol.

"I'm sure the league will look at it and we definitely won't forget about it," said Luongo, who played the first two periods. "You don't do that. You respect your opponents and if your opponent doesn't want to engage in a fight, there's no reason to drop your glove and punch him square in the face.

"Bit of a gutless play. You don't do those types of things."

With the Canadiens losing 2-1 at the start of the third period, Domi began tugging on Ekblad's shirt, asking him to fight. With the Panthers star showing no interest to drop the gloves, Domi punched him in the face twice, but still Ekblad didn't respond. That's when Domi dropped his right glove and sucker punched him right on the nose.

The bloodied Ekblad dropped to the ice. Domi was given a minor, major and match penalty on the play.

"NHL Player Safety will review it. It's in their hands now," said Panthers coach Bob Boughner. "We had a delayed penalty and Ekblad was just trying to stay out of it. I didn't expect that he was going to drop his glove and sucker punch him."

Added Mike Hoffman: "I guess they were trying to showcase something over there. It's pre-season, so maybe guys are trying to make an impression. But maybe do it by playing hockey."