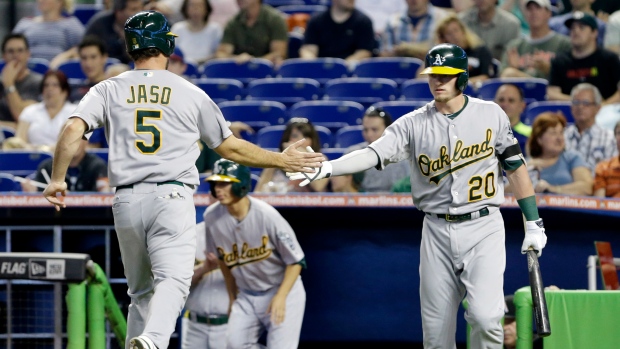 MIAMI - Half an hour after the Oakland Athletics' latest extra-inning win, first baseman Brandon Moss stood at his locker showered and shirtless, trying to cool down so he could dress.

The Athletics perspired plenty but eked out a 14-inning seesaw victory Saturday, sealed when 10th-year veteran Jeff Francis of North Delta, B.C., retired the final two batters with the bases loaded for his first career save to beat the Miami Marlins, 7-6.

"Relief," he said. "To expend everything you have during a game like that, those are tough games to lose. I'm glad we won."

For the second night in a row, the Athletics won despite squandering a 4-0 lead. They also overcame a blown save by Sean Doolittle, whose streak of 26 2-3 innings ended when Miami scored the tying run in the ninth.

Josh Donaldson's two-out RBI single scored Moss from second base with the go-ahead run in the 14th. After Francis entered the game with the bases loaded in the bottom of the inning, Jarrod Saltalamacchia struck out, and Donovan Solano flied out to end the game.

"I'm not used to finishing games," Francis said. "To slap hands like that after the game these guys put together was a thrill."

While the Athletics won, they may have again lost right fielder Josh Reddick. He left the game in the fourth inning with a strained right knee and is scheduled to have an MRI exam Sunday.

An injury to the same knee put him on the disabled list early this month.

The marathon victory was a pick-me-up. The Athletics won their third in a row and improved to 6-1 in interleague play. They're 9-5 in extra-inning games.

By contrast, the Marlins have played five games lasting 13 or 14 innings this season, all since June 6, going 0-5.

"You play 13 or 14 innings and you don't win, it takes a toll on you for sure," manager Mike Redmond said. "We have to figure out how to get that big hit and make that big play to get the win."

The A's were blanked for five consecutive innings before breaking through in the 14th. Moss doubled with two out against Jacob Turner (2-6). Donaldson singled on the next pitch and Moss barely beat the throw home from centre fielder Jake Marisnick.

The 4-hour, 47-minute game left plenty of time for oddities. Oakland's Coco Crisp scored from third on a strikeout, while teammate Jed Lowrie hit into a 5-6-3 double play. The Athletics' Yoenis Cespedes was out when he rose after a slide on a steal attempt, lifted his foot off second base and was tagged.

Both teams ran out of healthy position players. Tommy Milone, scheduled to pitch for Oakland on Sunday, flied out when he pinch hit in the 12th.

Moss and Alberto Callaspo had two RBIs apiece for the Athletics, who scored four times in the first inning against Nathan Eovaldi. But Miami rallied for a 5-4 lead.

Crisp's alert baserunning helped the A's score in the fifth to make it 5-all. He was at third with one out when Moss struck out and the ball rolled away from Saltalamacchia. When Saltalamacchia threw to first for the out, Crisp sprinted home and easily beat the return throw with a headfirst slide.

"He can be a risky player, and he's one of the better baserunners in the league," Melvin said.

NOTES: Marlins LF Marcell Ozuna left the game in the eighth inning because of cramps. ... A's C Derek Norris, who left Friday's game due to tightness in his back, wasn't in uniform and isn't expect to play until Tuesday at the earliest. ... Marlins LF Christian Yelich is expected to be activated Sunday and rejoin the starting lineup after missing two weeks with a back injury. Miami is 31-26 when he bats leadoff and 8-16 when he doesn't. ... After the game, the Marlins optioned Marisnick and RHP Anthony DeSclafani to Triple-A New Orleans. Before the game, they recalled RHP Sam Dyson from New Orleans. ... LHP Milone (5-3, 3.89) tries to win his sixth consecutive decision Sunday when he faces the Marlins and LHP Andrew Heaney (0-2, 4.91).