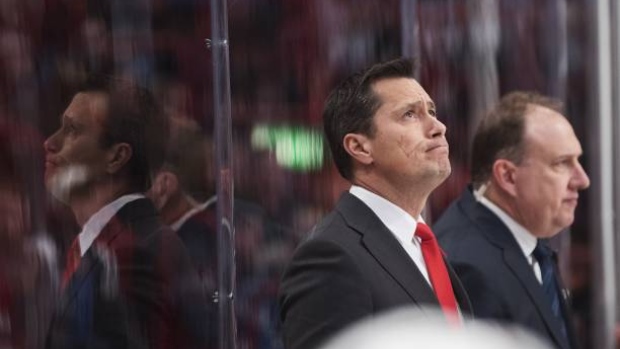 Ottawa Senators general manager Pierre Dorion has not yet made a decision on head coach Guy Boucher and told TSN’s Mark Masters evaluation of the coaching staff is ongoing.

Sens' Dorion said evaluation of coaching staff is ongoing; will meet with Boucher on Monday with a decision to come in the next few weeks

Dorion and Boucher are scheduled to have a meeting on Monday with a decision to come in the next few weeks.

Boucher has one year left on his contract and given the Senators’ disappointing season in 2017-18 where they finished 30th in the overall standings, rumours have swirled about his job security.

While Dorion has not publically endorsed Boucher as his coach for next season, he did seem sympathetic to the criticism Boucher received throughout the season.

“I’ve said this all along: I think Guy has the toughest job in Ottawa as head coach of the Ottawa Senators,” Dorion said earlier in the month.

Meanwhile, as the Senators landed the No. 4 overall selection Saturday night at the NHL Draft lottery, Dorion indicated the Senators are likely to keep the pick and elect to send 2019’s first rounder to the Colorado Avalanche as part of the Matt Duchene deal.

“We think top four is pretty special and we know that player has a very good chance of playing for us next year so we’re excited about that,” Dorion said.

"We'll wait to see who the first three picks are and we'll probably tell Joe (Sakic) if Player A or Player B is there most likely we'll keep the pick and as we talked about at our Town Hall meeting we're at 99.9 per cent (sure) and I think the odds remain the same."

Dorion offered high praise on Filip Zadina, Andrei Svechnikov and Brady Tkachuk, at least one of which is expected to be around should the Sens keep their No. 4 pick.

"They all bring a certain element to the table to produce offence. They all look like character people ... I watched them all in the playoffs so really excited about the possibility of taking one of those three guys."