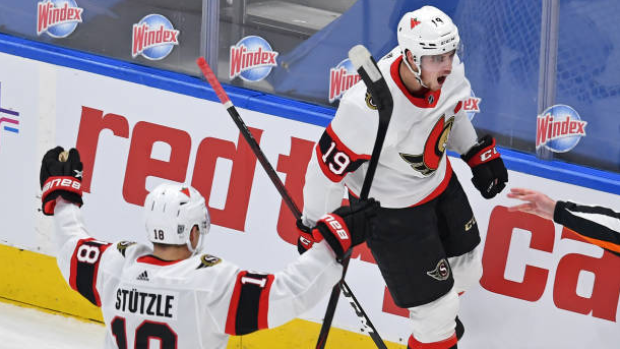 Ottawa Senators winger Drake Batherson will have a chance to break the franchise goals streak record on Tuesday against the Montreal Canadiens.

He's currently tied for the record with Jason Spezza, Dany Heatley, Daniel Alfredsson and Bob Kudelski after scoring in a sixth straight game as the Sens beat the Calgary Flames 5-1 on Monday.

The 22-year-old, who had six goals in 43 career NHL games entering this season, said he's just as surprised as anyone else by his breakout.

"I couldn't tell you what's going on," Batherson said after Monday's win. "I said to the boys, 'I think the last time I scored six like that was maybe peewee.' I don't know. Everything I'm just shooting is going in. The boys are making some great plays for me.

"The second one was lucky tonight."

Thanks to the 1st of 2 tallies in his team's 5-1 triumph over the Flames earlier on tonight, Drake Batherson has tied 4 other players for the longest streaks of consecutive (regular season) games scoring at least 1 goal on this @Senators franchise list pic.twitter.com/15HZ0Zpxc0

A fourth-round pick of the Senators in 2017, Batherson has nine goals and a team-high 17 points in 24 games this season. He has six goals and nine points over his past five games.

"It's evident just how talented he is," goaltender Matt Murray said of Batherson. "He's a great shooter, he's a smart player, he's obviously in the right spot a lot. One of the ways he scores goals is he just puts himself in the right spot. The puck comes to him and he buries his chances."

Helped by Batherson's streak, the Senators have won four of their past five games. Ottawa remains last in the North Division with an 8-15-1 record.