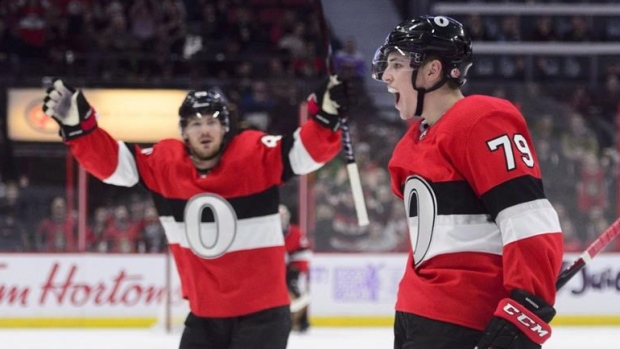 The 21-year-old forward hopes he can convince new Senators coach D.J. Smith that he deserves a spot with the big club at training camp.

"Obviously it's a fresh start with all the new coaching staff," Batherson said before a Senators team beat the Winnipeg Jets 2-1 in overtime in the final game of a rookie showcase tournament on Monday night at CAA Arena. "A lot of them have never seen me play before so I need to prove it to them."

This is Batherson's third consecutive year in the rookie showcase. The former fourth-round pick led the AHL's Belleville Senators in scoring last season with 62 points in 59 games.

The six-foot-three Batherson got into 20 games in Ottawa last season, picking up three goals and six assists.

"It's definitely helped me out with my game for the last year for sure," said Batherson, a dual Canadian/U.S. citizen. "I love being at the rink and I love to win. I'm looking to bring that into the team each and every night."

"In the last two seasons, I've proved it to the old coaching staff," he said. "It's a whole new staff (this year) so I have to do it all over again at camp and that's what I'm trying to do."

Batherson is in his final year of a three-year entry-level contract with the Senators.

"The quicker you can get to the NHL, the better for younger guys to produce at that level," he said. "Obviously, the big goal is to sign a good contract. For me, I'm just taking it one day at a time and to make the team as quickly as I can."

"I'm happy to be here," he said. "For all the young guys, it'll be good going to the main camp and having a couple of games under our belt and be able to get the legs going for the big camp."

Batherson is a second-generation hockey player. His father, Norm Batherson, played with the Thunder Bay Senators of the Colonial Hockey League, an Ottawa affiliate, in 1993. He also played for the Prince Edward Island Senators of the AHL in the same year. Drake's uncle Dennis Vial had five seasons with Ottawa and from 1993-98.

Drake Batherson says it is an honour to continue the family's legacy with the Senators' organization.

"I remember when I was 12, I came for a trip to Ottawa and my uncle got us in the press box for a game," he said. "Seven years later, it works out that I get drafted to the team. I knew a lot about the team and I'm happy to be a part of it."