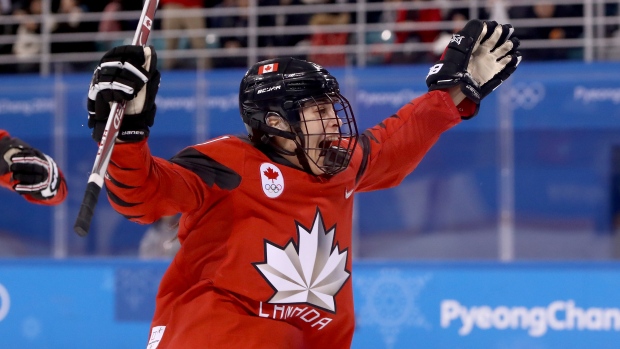 TORONTO – When the Canadian Women’s Hockey League shuttered last spring, the move united 200 female hockey players in a common goal – to build a better, more sustainable future for their sport for the next generation of girls.

It was that dream that spawned the aptly named Dream Gap Tour, a travelling showcase of the sport’s elite talents that kicks off in Toronto this weekend, to entertain and educate about how women’s hockey can become a viable career path.

This first event will feature youth clinics and a four-team exhibition tournament over Saturday and Sunday at Westwood Arena. Marie-Philip Poulin, Hilary Knight, Megan Bozek and Natalie Spooner are all expected to be part of the Toronto stop.

In her role as interim commissioner of the CWHL, Hefford was at the centre of the league’s decision last May to forgo playing this season due to an “economically unsustainable” business model. Hefford knew first-hand what the league was lacking, having been one of its most decorated players from 2007-2011 and retiring as the CWHL’s all-time leader in goals (130) and points (234).

That experience convinced Hefford that without proper financial support, girls wouldn’t have a legitimate league to aspire towards playing in.

“For a long time we were just sort of grateful for what we had,” she said. “And we’re kind of just supposed to appreciate that. We’re starting to understand that we are stifling young girls at a very young age. Many of the women in these 200 players may never benefit from what they’re doing right now, but they so strongly believe the next generation of women hockey players will benefit in a big way.”

Joined at the Dream Gap Tour kick-off by Canadian Olympians and event participants Sarah Nurse and Renata Fast, Hefford outlined where the next women’s league needs to make significant improvements.

“A real sustainable league needs to have the infrastructure and the resources to provide that viability and the long-term success,” she said. “We’ve never had that real infrastructure, whether [that’s] health insurance, or ice time, accessible ice time or a living wage…having a marketing department and ticketing department, a communication department.”

While the pragmatic aspects of a new league are vital, Nurse is also driven by her own experience as a once-aspiring hockey player.

She grew up harbouring similar pro hockey dreams to her cousin Darnell, who’s now a defenceman for the Edmonton Oilers. But at seven years old, when Sarah told people she wanted to play hockey professionally, the reaction was different than when Darnell expressed the same career goal.

“They encouraged him, they thought it was a realistic goal,” Nurse said. “When I said I wanted to play hockey, they’d say, ‘Okay, what else?’ They’d say there is no professional women’s hockey, and I’d need a real job. [We] really need to see this game as an investment. This is an incredible product and we are really an investment and we’re ready to prove that to the world.”

The Swedish Ice Hockey Federation has failed to reach a new agreement with the players, and last week it was announced that Sweden is cancelling the Four Nations Cup, a yearly tournament between Canada, the U.S., Finland and Sweden, that they were set to host in November.

Hefford says she supports the Swedish players in their decision at what’s become a critical juncture for women’s hockey worldwide.

“I think we’ve been at a pivotal time since the CWHL folded to be honest,” she said. “It really has changed the conversation. I think it’s made people aware of the needs and the lack of resources. If we believe in allowing our young girls to dream like our young boys, we [have to] believe this is going to create stronger women for the future.”

The Dream Gap Tour is the first major step in that direction by the CWHL’s displaced players and executives. After the opening weekend tournament in Toronto, stops are planned in New Hampshire and Chicago, with other dates possibly to be announced. The 200 players who helped make the event a reality put aside differences of team and country to make it happen, and they’re steadfast in the belief its message will resonate with young girls.

“Women are powerful. Women coming together, we can achieve great things,” said Fast. “I hope that a young girl sees what we’re doing and learns about what we’re doing and they’re inspired to continue playing hockey but also realize that if there is something you believe in, you should fight for it."