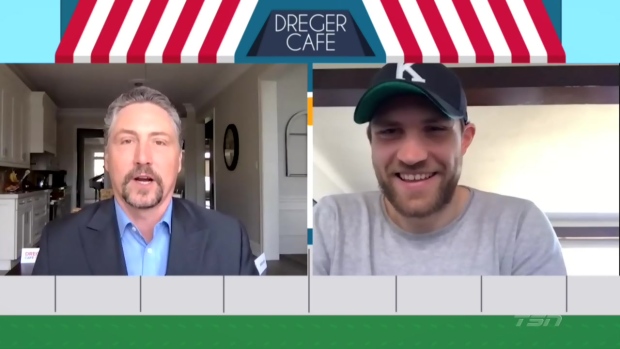 TSN Hockey Insider Darren Dreger has relocated the ‘Dreger Cafe’ from the World Hockey Championship to his home to bring you the latest from some of the game's prominent personalities.

Here are a three key topics from their discussion:

Darren Dreger: You were in line to win the Art Ross, certainly a contender, if not the front-runner for the league’s Most Valuable Player, does any of that stuff matter at this stage?

Leon Draisaitl: I’m obviously in a way proud of the way that I’ve played and it does matter, but there’s more important things right now in the world going on, much more important than winning a trophy or anything like that.

Dreger: You’re a team guy first this I know, but it has to be more fun playing on Connor McDavid’s line, instead of Dave Tippett doing what most coaches do, trying to spread the wealth, spread the offence around a little bit and splitting you up when it’s appropriate to do so.

Draisaitl: If I told you that I don’t like playing with Connor I’d be lying to your face, I think everyone would. Getting a chance to play with probably the best player in the world, it’s special and it’s a lot of fun, no question. But you know the line that I had there at the end with (Kailer Yamamoto and Ryan Nugent-Hopkins), we’ve been clicking and I think it made our team more dangerous. That’s what we all want, we want a dangerous team and not just one dangerous line.

Dreger: I’m told that you’ve watched a ton if not all of Pavel Datsyuk’s games - what is it about Datsyuk that you’ve tried to take away from the way he plays and why do you fixate on his game?

Draisaitl: He’s always been my go-to guy for some reason. I love the way he plays the game, I love the way he thinks the game, how he plays in all three zones and all situations. His magic side when he had the puck on his stick in the offensive zone or through the neutral zone, it was just a guy that I liked to learn from a lot.