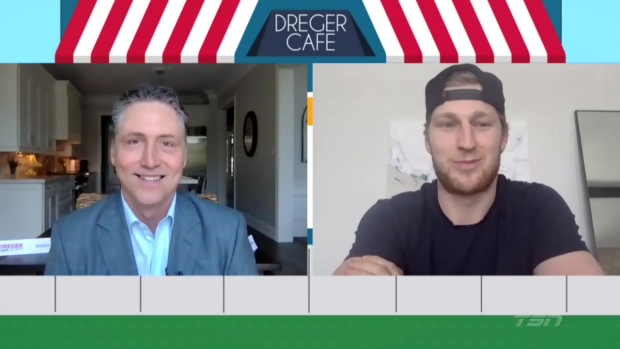 TSN Hockey Insider Darren Dreger has relocated the Dreger Cafe, brought to you by Old Spice, from the World Hockey Championship to his home to bring you the latest from some of the game's prominent personalities.

Darren Dreger: What’s been the most difficult, or the most challenging aspect of the pause for you?

Nathan MacKinnon: For me, personally, this was kind of the first year I really felt like we could win. The first six years of my career the goal was just to make the playoffs and I guess this would have been the fourth time I actually made it but the real first time I guess that I think I could actually win. There’s only three or four of us left from my rookie year, which is crazy. We have a very very strong team and it just sucks. Hopefully now we get that closure, you know now it’s going to be a little different, but you didn’t really know for a bit if we could finish it up.

Dreger: Is reseeding a better formula in your opinion as opposed to going with a bracket sort of setup?

Dreger: Are you concerned with any of the health risks? And it could range from COVID-19 to the fact that you haven’t been on the ice in a long time. Any concern from a medical or health perspective?

MacKinnon: I think that’s what the training camp is for. You know, it’ll just be like a similar to the start of the season in October and hopefully we take it easy for the first week and then we start ramping it up and make sure our groins and hips react properly. In terms of the COVID issues, I think from my understanding we’re going to get tested frequently so we’ll be isolated I think somehow, I’m not sure how that’s going to work but I’m not going to be thinking about that honestly. Obviously it’s a very serious situation and a lot of people have been affected by it but the precautions that the NHL will take with myself, all the teams, I won’t be concerned about that at all.