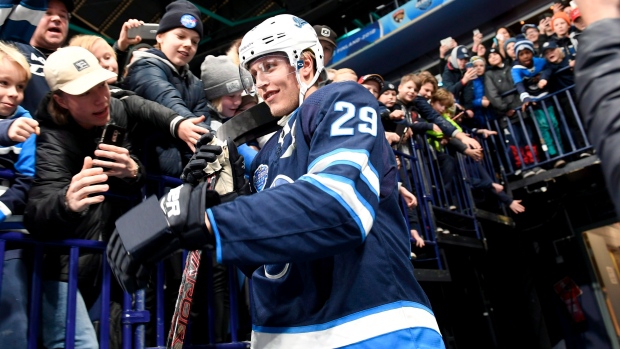 Restricted free agent forward Patrik Laine caused a bit of a stir Tuesday after telling Finnish media outlet Iltalehti that his linemates he played with last season are not the team's best players and it's affecting his negotiations with the Winnipeg Jets.

"When you're having contract negotiations, one thing always is who are you playing with," Laine explained, as translated by Iltalehti writer Pekka Jalonen for Winnipeg's TSN Radio 1290. "With the merits I have, somewhere else I'd have an opportunity to play with the best players. Everybody who understands hockey knows that.

"There are top lines and then there is our line. But I play with the guys I'm told to play [with]."

“I’d be disappointed if Patrick Laine didn’t want to play with Winnipeg’s top players. Obviously, Mark Scheifele and Blake Wheeler are Winnipeg’s two best players," said Dreger. "I don’t think there’s much to read into that and I think it's taking that out of context to suggest that this is a slight against Little or it’s a slight against Nikolaj Ehlers."

Laine played most of last season with centre Bryan Little, scoring 30 goals and 20 assists over 82 games, his third year in the NHL.

Dreger said despite wanting to play with Winnipeg's best, putting Laine on a line with Mark Scheifele and Blake Wheeler is a "challenge organizationally."

"You’ve got one of the top goal scorers in the National Hockey League in Patrik Laine who wants to continue to boost his offence and the way to do that while staying in Winnipeg is playing with Scheifele and Wheeler. But, it’s a challenge organizationally because now you got three kids still in the top six, you’ve got three right-handed shots on that top line if Paul Maurice opts to go that way. If Patrik Laine could add a little bit more power to his game at this point of his NHL career then he’s going to earn his place in the top three.”

What about the other restricted free agents still unsigned in the NHL?

The Vancouver Canucks locked up forward Brock Boeser to a three-year bridge deal on Monday, but, as of Tuesday evening, it hasn't led to other RFAs getting any closer to agreements with their teams.

"That’s not to say the restricted free agents still without a contract aren’t interested in continuing to negotiate, of course they are. If I look at Calgary and I look at Matthew Tkachuk and that negotiation, I’m told it remains status quo. The process continues. Sounds a little bit cliché. Meanwhile, Mikko Rantanen of the Colorado Avalanche, I think there’s more of a gap there and that one becomes more of a contentious issue, perhaps likewise with Brayden Point and the Tampa Bay Lightning. We haven’t talked about Kyle Connor in relationship to the Winnipeg Jets," said Dreger. "So it’s too soon to say whether or not the Boeser signing or the Mitch Marner signing late last week will have any sort of influence."

With the opportunity to submit an offer sheet to Marner now off the table, Dreger wonders if teams would be interested in any of the other remaining restricted free agents.

"I can tell you when I look at the Marner case and the six-year extension at $10.893 million and Darren Ferris, the agent, on TSN Radio to start this week talking about the reality of the offer sheets that were willing to be presented, I would wonder and I got teams asking me why this hasn’t happened. If a team out there who is perhaps targeting Marner looks at one of these other top RFAs now.”

The NHL season starts on Oct. 2.