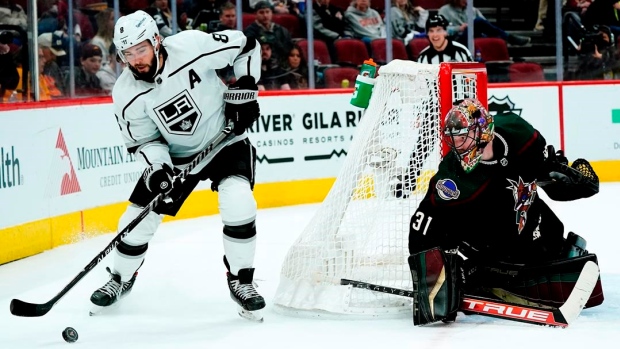 EL SEGUNDO, Calif. (AP) — If the Los Angeles Kings reach the playoffs for the first time since 2018, they might have to do it without Drew Doughty as general manager Rob Blake cannot say if the standout defenseman will play again this season.

Doughty has missed the past six games after sustaining an upper-injury against Boston on March 7. The two-time Stanley Cup winner and blue-line anchor leads Kings defensemen with seven goals and 24 assists in 39 games.

“It’s a little early to say,” Blake said Monday. “I think we’ll exhaust every option possible. I mean, he’s out there skating now but not participating in drills and things. That’ll be an assessment with the doctor in the next few days to understand the next step to see if he can come back and play.”

Los Angeles is missing five of its six defensemen that played on opening night, a group that includes the top pair of Doughty and Mikey Anderson.

Blake said Anderson is likely to miss at least another month after sustaining a lower-body injury against the Bruins.

To bolster a group that is now heavily reliant on inexperienced players, Blake traded for defenseman Troy Stecher on Sunday. Stecher had one goal and one assist in 16 games for Detroit, and he has plenty of familiarity playing with Kings defenseman Alex Edler from their time together in Vancouver.

Edler recently returned after missing 36 games because of a broken ankle.

“Him and I were D partners for four years together, so very familiar with Eddie,” said Stecher, who practiced with Edler in his first workout with the Kings on Monday. “I spent the All-Star break with him this year, so very excited to be back with him.”

Among the injured forwards for Los Angeles, Viktor Arvidsson (lower body) could be back at practice this week, with Brendan Lemieux (lower body) likely to follow next week.

The Kings are second in the Pacific Division, but a 2-3-1 record over their past six games as injuries have piled up has allowed Edmonton and Vegas to gain ground.

Blake is still optimistic Los Angeles can hold onto a postseason berth.

“These guys have put themselves in a real good spot, but we need to get better,” Blake said.