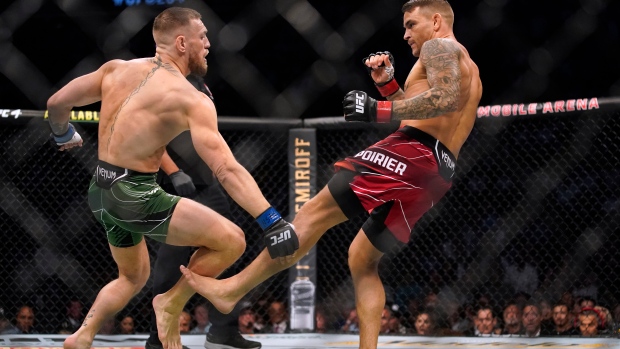 LAS VEGAS (AP) — The fighter who erased most of Conor McGregor’s mystique this year is a polite family man from Louisiana who makes his own hot sauce, does extensive charity work and would prefer to compete in empty gyms.

Dustin Poirier is a curious choice to be the archenemy of a charismatic international superstar. Yet in two fights over the past six months, Poirier has broken McGregor’s leg, beaten him bloody and reduced the former two-division UFC champion to a snarling, desperate antihero who refuses to accept the evidence of his sporting decline presented to him by his unlikely nemesis.

Although he couldn't do much in the cage against Poirier, McGregor put on a show afterward. A graceful loser earlier in his mixed martial arts career, McGregor inexplicably claimed he had been winning the fight — all three judges scored the only round for Poirier, with two giving it to Poirier 10-8 — and crudely insulted both Poirier and his wife before being carried from the cage.

“He got what he had coming to him,” Poirier said. “Karma is a mirror.”

Poirier claims he doesn't want to be a celebrity, and the 32-year-old lightweight is weary of the energy-draining mental gamesmanship of fight promotion — particularly when the bombastic McGregor is his opponent.

While he accepted the back-to-back bouts for their huge financial rewards, the tedious toll from McGregor's months of trash talk was obvious in Poirier's voice when he anticipated his trip home to Lafayette for some well-earned rest and quietude.

“I don’t even like this (stuff) anymore, dude,” Poirier said Saturday night. “I just scrap because I’m good at it and I like to fight, but all this other stuff, all the talk ... I just come here to get the fight.”

It's never just a fight for McGregor, who has built a fortune off a persona that's proving more durable than his combat sports abilities. In between his classless comments about Poirier in the cage, McGregor made sure to plug his official post-fight afterparty at the Wynn casino before he headed off for leg surgery.

McGregor is 1-3 in MMA and 0-1 in boxing since late 2016. He turns 33 on Wednesday, and by the time his leg heals, it will be a half-decade since his last victory over a relevant opponent. He is living on the sports world's memories of his remarkable rise, yet it seems likely he'll remain the UFC's biggest star until he retires.

For Poirier, the challenge of filtering McGregor's noise seems to be even bigger than the challenge of beating a power-punching Irishman who still lags well behind the world's best fighters in almost every other MMA discipline except self-promotion.

Poirier had little trouble with McGregor in both fights this year, comfortably overcoming everything McGregor did — both legal and not-so-legal, as when McGregor stuck his fingers into the cuff of Poirier's gloves Saturday night to pull his opponent into his up-kicks.

“I’m proud of the performance, but I am proud of maintaining the mindset through all the craziness, all the talk, all the noise that’s surrounding me when I’m coming into these fights,” Poirier said. “I don’t need that. I’m trying to be a light. I’m trying to help people. My goal is to provide for my family, and with these same hands that I beat these guys down with, lift my city up, lift people in need up.”

That toxicity was thick in T-Mobile Arena. A jingoistic crowd that had chanted “U-S-A!” for every other American fighter on the UFC 264 card produced loud boos for Poirier after his victory.

“It’s noise," Poirier said with a shrug. "I don’t really overthink that stuff anymore. Thank you for buying a ticket.”

But a few minutes later, Poirier thought back wistfully on his victory over Dan Hooker in June 2020 in front of only TV cameras and a few dozen people at the UFC’s Apex gym on its corporate campus.

“I liked fighting in the Apex when it was quiet,” Poirier said.

McGregor will need months to heal his leg, giving him plenty of time to recalibrate his mind for a comeback or for retirement. Unfortunately, it's also plenty of time for McGregor's perspective to further warp if left unchecked by his family and friends.

A few hours after his loss, McGregor captioned an Instagram post of himself being wheeled away on a stretcher with a quote from “Scarface."

Poirier’s next fight will be for the UFC lightweight title. He’ll meet Brazil’s Charles Oliveira, another veteran fighter who clawed his way to the top of the division with many years of hard work, likely at the end of this year.

But Poirier also believes he'll eventually grit his teeth and return to the McGregor maelstrom for another well-paid chapter in his unlikely rivalry with the biggest star in the sport.

“We are going to fight again," Poirier said, "whether it’s in the octagon or on the sidewalk."