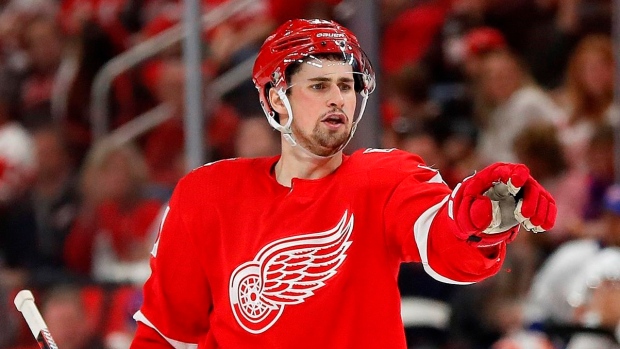 Dylan Larkin believes he's ready to wear the "C" for the Detroit Red Wings, but he's not allowing the possibility to distract him ahead of his fifth season with the team.

"I feel ready for it," Larkin told TSN of the captaincy at the Power Edge Pro camp on Tuesday. "I think it's something that I can't focus on. I can't lose sleep about it. I can't control it. I just try to be myself and play the game that I love and play with a lot of passion and everyone in the NHL has been a leader at some point in their careers. I'm lucky that we have great veteran leadership and it's taken a lot of pressure off me.

Larkin, 23, is coming off a career-best season in which he scored 32 goals and posted 73 points in 76 games.

The Red Wings played last season without a captain after Henrik Zetterberg, who wore the "C" for six seasons, was placed on long-term injured reserve due to back issues.

"He absolutely was the captain of the team," Larkin said of Zetterberg. "He was the best captain I've ever played for in my young career, but you see a lot of guys that played in other places that played for pretty good captains and they speak very highly of what kind leader he was. I think just his extra gear that he had – he always found a way to push harder and when the team seemed to have nothing he had that extra oomph and he found a way to get it done. He was always reliable. He always did the right things in the locker room, showed up to the rink, worked as hard as he could and set a good example for the young guys.

"(He's) someone to this day that I'm in contact with, I still text him if I ever stumble upon things or have problems so he's been one of the greatest mentors I've ever had."

The Red Wings will take to the ice this season with a former captain as their general manager in Steve Yzerman. Larkin said Tuesday he believes Yzerman will instill a new energy in the team.

"He's done a lot quietly," Larkin said of Yzerman, who took over from Ken Holland in April. "With the time he came in, it's a busy time with the draft and free agency. We haven't had much conversation but in the conversations we've had it seems like he's looking to make it a better environment, a more positive environment in our locker room and I think that's what we need."

The Red Wings have missed the postseason in each of the past three years after the reaching the playoffs in 25 straight seasons.