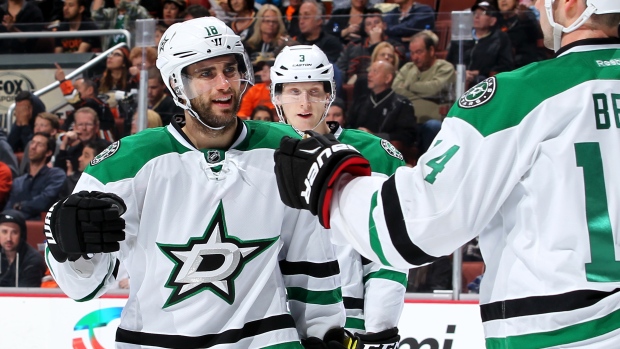 ANAHEIM, Calif. - Although the Dallas Stars' season ends this weekend, Jamie Benn and his high-scoring teammates are still playing some of their best hockey.

Unless the Pacific Division champion Anaheim Ducks rediscover their best game soon, their own season might not last much longer.

Patrick Eaves scored two goals and Jordie Benn added his first goal in three months, leading the Stars to a 4-0 victory over the playoff-bound Ducks on Wednesday night.

Jamie Benn had three assists to pull even with Sidney Crosby and John Tavares atop the NHL scoring race for the Stars, who will miss the post-season despite winning 13 of their past 18 games.

"You look at the last month, we've played some pretty good hockey," said Jamie Benn, who assisted on a goal by his brother for the first time in their NHL careers. "That's what's frustrating, is we know we're a good team when we play the right way. We can beat most teams in the league."

Jamie Benn's third three-point performance in the past four games gave him 19 points in the past 11 games overall, surging into the race for his first scoring title. Benn, Crosby and Tavares all have 83 points apiece.

"I'd be lying to say it wasn't on my mind, but it's not really the trophy I was going for this year," Benn said. "I think the high expectations that our team had this year kind of failed."

Jhonas Enroth made 19 saves in his fifth career shutout for the Stars, and Vernon Fiddler opened the scoring in three-goal second period of the Stars' eighth victory in their past nine road games.

"I don't want to say it was an easy game, but my teammates made it pretty easy for me," said Enroth, who was barely tested in his first shutout since Dec. 9 when he was with Buffalo. "I'm not sure what was going on in their locker room, but we didn't have any pressure on us. The whole team played well in front of me."

Frederik Andersen stopped 28 shots for the Pacific Division champion Ducks, who wasted their first chance to lock up home-ice advantage throughout the Western Conference playoffs with a victory.

"That was just a terrible hockey game," forward Matt Beleskey said. "I don't think we made a tape-to-tape pass the whole game. That's a bad game for our fans, to be honest. We've got to feel sorry for the people who came out to watch that one, but forget about it and move on. Better have it now than in a week."

The Ducks scratched Ryan Getzlaf for the second straight game, preferring to rest their captain and leading scorer for the post-season despite their light recent schedule. The New York Rangers passed the Ducks and secured the Presidents' Trophy while Anaheim spent the past four days resting and practicing.

Anaheim's loss gives hope to the St. Louis Blues, who remained two points behind the Ducks heading into their game against Chicago on Thursday. The Ducks still can win the West with a non-shootout victory in their season finale at Arizona on Saturday, however.

"These things should be done with," said Anaheim coach Bruce Boudreau, who could be seen ripping into his team during a second-period timeout. "It's Game 81. We're going into Game 82. The only thing you're hoping for is, 'OK, they're waiting for the playoffs and they haven't had a meaningful game for a while. That being said, it's still no excuse."

Despite their lofty record and yearlong success, the Ducks have been outscored by a combined 97-73 in the second period this season.

Shortly after Fiddler scored on Clayton Stoner's turnover, Jordie Benn connected with a long shot through traffic for just his second goal in 72 games this season and his first since Jan. 4.

NOTES: Dallas finishes the season at home Saturday against Nashville. ... Before the game, the Ducks activated Tim Jackman from injured reserve and sent Stefan Noesen back to the AHL. Beleskey and Stoner also returned from three-game injury absences. ... Dallas' Valeri Nichushkin played his third game since early November. He missed most of the season following hip surgery. D Patrik Nemeth, who missed 4 1/2 months with an arm injury, returned from a two-game absence.