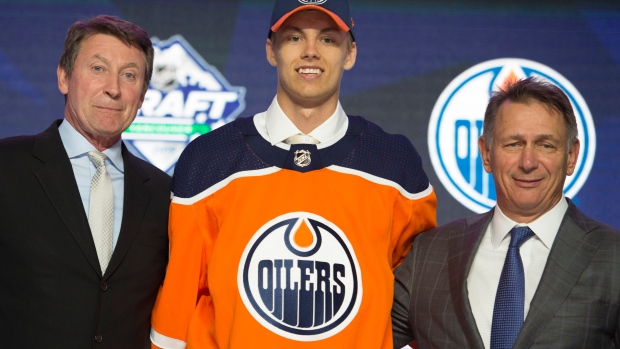 According to general manager Ken Holland, the Edmonton Oilers have no plans to rush the development of 2019 eighth overall pick Philip Broberg.

Holland told the Edmonton Sun that Broberg will spend next season with Skelleftea before potentially making the leap to the NHL for the 2021-22 season. The 18-year-old has one goal and eight points in 45 games with Skelleftea this season, his first playing in Sweden's top league. He added one goal in seven games at the 2019 world juniors.

“Obviously when you take a player eighth in the draft and he’s a defenceman you want some offence, but Philip was an 18-year-old playing in a men’s league this season,” Holland said.

“We feel he’s in a good place at Skelleftea, Philip was happy this year and we’d like to see him on more speciality teams next season. We’d like to have him come to our training camp this year to see what he looks like.

“And the last world juniors he was playing with [Los Angeles Kings first-rounder, Tobias] Bjornfot in a defensive role. [Toronto first-rounder, Rasmus] Sandin and a few others were used on the power play and with the more offensive players. He wasn’t that guy then, but my hope is at the next World Juniors [scheduled for Edmonton and Red Deer over Christmas] he’ll be in that role if he earns it. And we’ll see him in our own backyard.”

Holland said he used a similar strategy of letting players develop while with the Detroit Red Wings and plans to follow that model with the Oilers.

“We built the program in Detroit where I was for a long time and our feeling was: ‘Just let these kids be.’ Very few young players made the Red Wings, the odd one like Dylan Larkin at 19. If you’re good enough, you’re good enough,” Holland said. “We want young players in an environment where they’re important. Certainly Philip wasn’t in that environment this past season where he was playing 18 to 22 minutes as a defenceman, on the power play or penalty-kill. But he still played 12 to 15 minutes. We’re hoping his role grows this upcoming season.

“Then he can come over to North America for the 2021-22 season and we’ll see if he can take somebody’s job. We’re not handing them out. Like all kids, they’re a work in progress.”