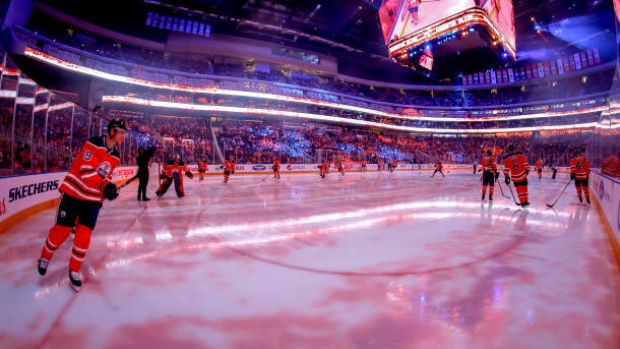 The Edmonton Oilers senior vice-president of communications and government relations is pondering a question about how long the team has been working on its bid to serve as an NHL hub city, should the league return to action sometime this summer.

"It feels like months, if not years," Shipton said. "Time works in a funny way right now. We've been deep on this thing."

That thing is trying to convince NHL, which paused its season March 12 because of the COVID-19 pandemic, that their city is the right spot to host 12 teams as part of a plan to complete the 2019-20 season and award the Stanley Cup.

It could also wind up being entirely out of their hands.

The NHL, which unveiled its return-to-play plan Tuesday that would feature 24 teams if the league is able to resume, announced that Vancouver and Toronto are also in the running along with Chicago, Columbus, Dallas, Las Vegas, Los Angeles, Pittsburgh and Minneapolis/St. Paul in the U.S.

The goal is to name two cities, but deputy commissioner Bill Daly said the Canadian government's mandatory 14-day quarantine for anyone entering the country would make markets north of the 49th parallel a non-starter.

"If we're not able to really get an interpretation of the quarantine consistent with our players' ability to travel in and not have to do a strict self-quarantine in a hotel room ... we won't be in a position to use any of the Canadian cities as a hub," Daly said. "So we're faced with having to find a solution to that. And hopefully we can."

The NHL said it will wait another three or four weeks before announcing its hub plans.

"We are having various discussions with various different departments in the Canadian government," Daly added. "We don't have a resolution there, but it's an ongoing dialogue."

Alberta Premier Jason Kenney penned a letter to Prime Minister Justin Trudeau on Wednesday where he encouraged the federal government to deem professional athletes and team staff as essential workers — meaning they would not be subject to a quarantine — similar to what U.S. officials announced late last week.

"Such an exemption from the Canadian government would be necessary for the (Oilers') bid," Kenney wrote. "The Government of Alberta believes there are effective strategies in place to mitigate any risk to our province if such an exemption was granted."

Weeks, not months or years, is what it took for the Oilers to prepare and submit hundreds of pages of documents to the NHL on everything from Rogers Place — their state-of-the-art home that opened in 2016 — to practice facilities, accommodations, and the province's and city's low novel coronavirus infection rate.

"We've really laid the groundwork on all fronts, with the government in particular, on what's most important, health and safety," Shipton said in a phone interview. "We've developed a comprehensive framework with the government on how we would run this thing in a safe way."

The Vancouver Canucks put in a bid similar to the Oilers, with a document trumpeting the benefits of that city as a hub, including its infrastructure and temperate summer climate, according to a team source granted anonymity because they weren't authorized to comment publicly.

"We see this as something that could be a positive initiative in a challenging time," Canucks COO Trent Carroll said in a statement. "Maybe bring a bit of hope and a spark back to the community."

British Columbia Premier John Horgan has been vocal about Vancouver as a hub, but struck a more cautious tone than his Alberta counterpart on Wednesday.

"We have rules in place today that we worked very hard to establish. Because the NHL made an announcement that involved Vancouver, we're not going to go rushing to change that," Horgan said. "Two weeks from now, four weeks from now, it could be a completely different situation provided we continue to see the progress that we've seen here in British Columbia.

"I don't want to rule out the NHL coming here. They haven't presented a plan to us. ... Today there's a 14-day self isolation period in place and I expect that will be there for the foreseeable future."

Horgan's comments are in line with Dr. Bonnie Henry, the province's health officer, who said the government won't be making any concessions in a jurisdiction that has done well to minimize infections.

"I would love to have hockey, but we have been very clear, and the premier has been very clear, that we're not bending the rules in any way that would put what we have achieved here in B.C. at risk," Henry said Tuesday. "I've yet to see a plan. I'm happy to see what we can do, but we won't be changing rules that would put anybody at risk or would undo the good work that we've done."

A spokesman for Maple Leaf Sports & Entertainment, the parent company of the Toronto Maple Leafs, previously declined to comment their bid, but Canada's biggest city has all the amenities the league would require, although Ontario's infection numbers are considerably higher than Alberta and B.C.

"The National Hockey League will choose a city in which it is not just safe for the NHL players, but also a safe environment for the people in that community that are hosting this tournament," he said on a conference call. "We think we put together a pretty comprehensive program that would involve that kind of safety, but those are decisions that the NHL will make."

Back in Edmonton, Shipton said the Oilers have been thoroughly impressed with Kenney, describing him as an "all-star" throughout the process.

"We talked to him very early about this as an opportunity for the province," Shipton said. "It aligns with his government's vision for reopening."

"We've got a tremendous pitch," Kenney said during a recent media availability. "I think we are the safest place they could find in the continent to come and, in a very thoughtful and careful way, finish off the season with the playoffs."

While other cities have gone about their pitches relatively quietly, Shipton said there's a reason the Oilers are more vocal about Edmonton.

It's no secret that like some other colder locales, the Alberta capital is viewed as an undesirable landing spot for some NHL players.

But that's in the winter.

"Edmonton in the summer is beautiful," Shipton said. "There's so many things going for the city that we feel like we're a little underrated in that category.

"It's important for us to get out and not be shy about it — be proud that we've got a beautiful city."

And for a province that's been hit with the double economic blow of cratering oil prices and a crippling pandemic, hosting 12 NHL teams and helping get hockey back on track could be a shot in the arm.

"We're such a passionate hockey province," Shipton said. "There's no doubt that it's been a very difficult time for a lot of individuals and a lot of businesses.

"We think it's not just an economic boost, it would be a really significant morale boost for the province at a time when maybe we need it the most."

This report by The Canadian Press was first published May 27, 2020.