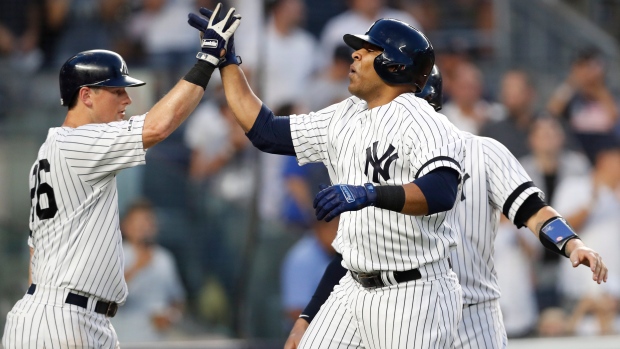 TAMPA, Fla. — Edwin Encarnación is hoping to return to the New York Yankees on Wednesday, and catcher Gary Sánchez could be back right after him.

The AL East champion Yankees, who are battling Houston and the Los Angeles Dodgers for the majors' best record, open a two-game series Tuesday night at wild-card contender Tampa Bay.

Encarnación ran, played catch and hit in an indoor cage.

Sánchez ran the bases, did some defensive work, and took batting practice in an indoor cage and also on the field.

"Everything I have done has gone well," Sánchez said through a translator. "There have been no problems at all. We just have to wait to see how things go in the next couple of days."

Yankees manager Aaron Boone hasn't ruled out using Sánchez during the final series of the regular season that begins Friday night at Texas.

Encarnación and Sánchez got hurt during a doubleheader Sept. 12 against Detroit. Both have hit 34 homers this season.