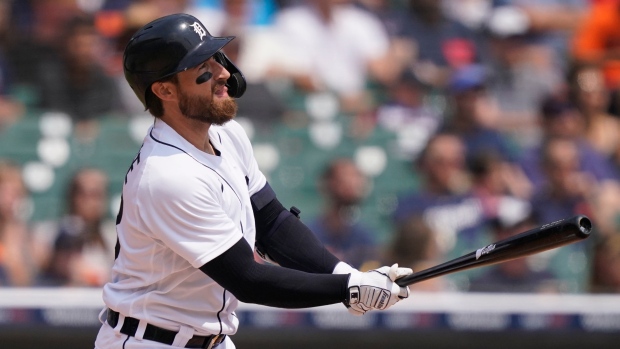 DETROIT (AP) — Eric Haase hit a two-run double in a three-run first inning and the Detroit Tigers went on to a 6-2 victory over the Baltimore Orioles on Sunday.

Detroit earned a split of the four-game series, improving to 30-24 at home this season. The Tigers tied a major league record with 59 home losses in 2019, baseball's most recent full season.

“This is the last day of our toughest stretch of the season," Detroit manager A.J. Hinch said. “We’ve played 17 games in 16 days without a day off, so it was nice to finish off that stretch with a win.”

Detroit's Tyler Alexander fell behind 2-0 after four batters, but didn't allow another run in four innings of work. Erasmo Ramirez (1-0) pitched two scoreless innings to pick up his first major league win since Sept. 3, 2018, when he beat the Orioles as a member of the Seattle Mariners.

The Orioles didn't score after a two-run first.

Baltimore's Spenser Watkins (2-2) allowed four runs on three hits and two walks in his first appearance against the franchise that drafted him in 2014. All three hits went for extra bases.

“It was incredible to finally pitch here after this being the goal for so long,” said Watkins, who went 5 2/3 innings. “I had to tamp down the excitement a little in the first inning, but I was proud to be here wearing black and orange.”

The Orioles started quickly, with Austin Hays hitting a double on the first pitch and advancing on Troy Mancini's long flyball. Ryan Mountcastle and Anthony Santander followed with RBI doubles over Akil Baddoo's head in center field, making it 2-0 after six pitches.

“We went out in the first inning and were extremely aggressive,” Orioles manager Brandon Hyde said. “That got us a quick lead, but we stayed that aggressive all day and it resulted in a lot of quick outs.”

Jeimer Candelario's RBI single made it 2-1 in the bottom of the first, and Haase followed with a two-run double to put the Tigers ahead by a run.

The game stayed 3-2 until Robbie Grossman tripled with one out in the sixth and scored on Miguel Cabrera's sacrifice fly.

“This was our first time seeing Watkins, but we got a lot of advice from all the guys who played with him in the minors,” Grossman said. “That helped.”

Cabrera's sacrifice fly was the 92nd of his career, moving him past Willie Mays and Barry Bonds and into a tie for 59th with David Ortiz.

“It is amazing playing on the same team as him, especially right now,” Grossman said. “He might be the best right-handed hitter in history, and it is crazy to see the names he's passing every day.”

Baddoo made it 5-2 with a seventh-inning RBI single and Grossman added a sacrifice fly later in the inning.

Orioles: Off on Monday before starting a three-game road series against the New York Yankees. Baltimore's Jorge López (2-12, 6.19 ERA) is scheduled to start Tuesday's opener against Andrew Heaney (6-7, 5.27).

Tigers: Off on Monday before hosting the Boston Red Sox in a three-game series. Detroit's Wily Peralta (3-2, 3.64) is scheduled to start Tuesday against Garrett Richards (6-6, 5.15).