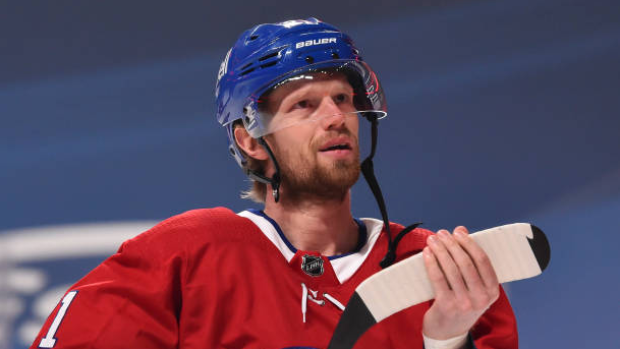 One month into the season, Eric Staal hasn't given up on returning for an 18th NHL season.

TSN Hockey Insider Pierre LeBrun writes in The Athletic that Staal is continuing to skate daily in Minnesota, while his agent, Rick Curran, "has been in regular dialogue with 3-4 teams." LeBrun adds his sense is those teams could decide later this month whether adding the veteran centre is right move for them.

LeBrun reported in September that Staal, who reached the Stanley Cup Final with the Montreal Canadiens last season, was hoping to continue his career with an American team.

"He is not ready to retire. He is committed to playing another NHL season, but he doesn’t have an NHL home," LeBrun said on Insider Trading. "Now, probably ideally [it] would be where his family has lived the last few years in Minnesota but the Wild have not shown interest in bringing him back and I don’t think that’s going to happen. A return to Canada where he finished the season with the Montreal Canadiens, probably not in the cards right now either. The preference for Eric Staal is to find a good fit in the U.S., that’s where his camp is working on now.

"He is committed to trying to come back for another year."

The 36-year-old was dealt to the Canadiens from the Buffalo Sabres ahead of the trade deadline last season, finishing with five goals and 13 points in 53 games between the two teams. He had two goals and eight points in 21 games during the Canadiens’ playoff run.

Selected second overall by the Hurricanes in the 2003 draft, Staal’s best season came in 2005-06 when he scored 45 goals en route to the lone All-Star appearance of his career. He also had 28 points in 26 games during the 2006 playoffs, helping the Hurricanes to their only Stanley Cup victory in franchise history.