At their best, the Montreal Canadiens stay out of the penalty box and outskate teams in waves at even strength. It is a point that I have harped on for some time now, but I will emphasize it once more: The Canadiens’ core strength is the ability to dominate teams at 5-on-5 through a frenetic pace and heavy shot volume advantage.

The Canadiens are fifth in 5-on-5 goal differential this season, 18 goals better than their opponents. The Vegas Golden Knights (+29) and Toronto Maple Leafs (+26) are two teams within striking distance of the Canadiens – two teams with genuine Stanley Cup aspirations.

Between head coaches Claude Julien and Dominique Ducharme, the Canadiens have found a competitive advantage through pace of play. They attack relentlessly in the offensive zone, and are even aggressive – in some cases, perhaps too aggressive – attacking opposing puck-carriers through the neutral and defensive thirds. But at the end of the day the Canadiens know they are going to leverage a speed and precision advantage to generate a shot advantage. It’s why they are +387 in 5-on-5 shots, second to only the Colorado Avalanche, and it’s a carryover from last season’s trend.

That brings me to trade deadline acquisition of veteran forward Eric Staal. General manager Marc Bergevin wanted to shore up the centre position for obvious reasons, with the team in need of a playmaker.

The 36-year-old presented an interesting opportunity – a buy-low candidate thanks to the futility of the Buffalo Sabres this season, and a player who showed signs of life a year prior in Minnesota. The cost was not significant either. The Canadiens had to part with a third- and fifth-round pick, with the Sabres retaining salary.

The one concern I had with the trade was that Staal is not a fleet-of-foot skater anymore; that much was obvious watching him play in Buffalo. And to play in the Montreal system, pace is a minimum requirement. The Canadiens have tried moving Staal around a bit – he’s seen most of his time so far with Jonathan Drouin, Corey Perry, Tyler Toffoli, and Artturi Lehkonen.

Stall is off to a slow start offensively, with a goal and no assists in eight games. More concerning is the time Montreal is spending defending the run of play with Staal on the ice. Consider the Canadiens since the trade deadline at a skater level for a moment: 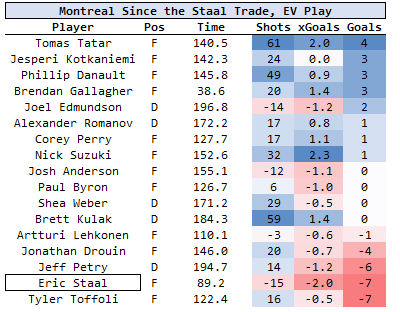 You never want to react to eight games, and you definitely do not want to react to eight games if you are looking at just goal differentials. I can find a bad eight-game stretch by pure goal differential for any player in the league: Connor McDavid went through an identical run during a stretch in March of 2019, and he’s been regarded as the world’s best player for years now. Whenever a player is getting 86.5 per cent goaltending behind him (like Staal has so far in Montreal), you need to exercise a bit of patience.

The shots – and really, where the puck is being possessed and by whom – is what is more concerning. Whereas most of the Canadiens are still in the green across the board, Staal is not. The only other players who stand out in the negative just so happen to be the players who have been skating with Staal since the trade.

A lot of the underwhelming numbers result from defending the run of play for long stretches – it means more survival shifts, rendering offensive opportunity quite limited. A sampling of Montreal’s shot profile with Staal’s line on the ice is a bit scary (via HockeyViz): 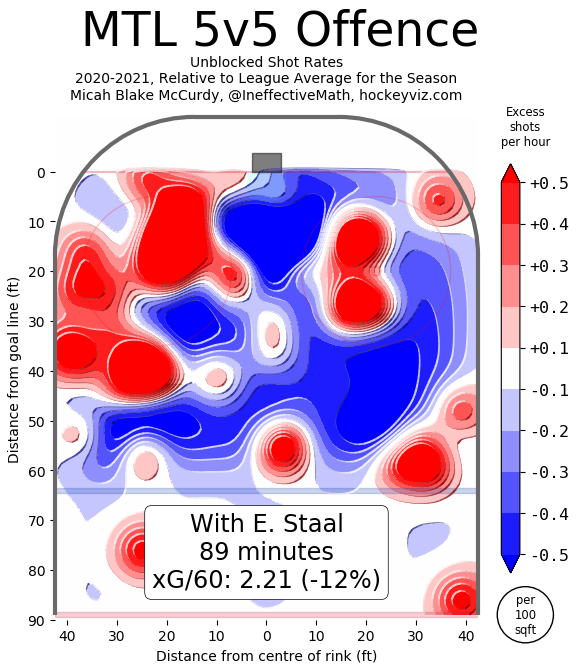 In summary: very few shots generated, and they are coming from the most distant of areas in the offensive zone. Most concerningly, there is nothing in the low slot.

The good news for the Canadiens is that they still have 14 regular-season games to work Staal into the lineup in preparation for a playoff run.

But the runway is quite short right now due to the truncated season, and it will be fascinating to see if the new head coach has a short leash with a veteran player. If Montreal doesn’t start seeing better results soon from the Staal line (and really, the bottom-six forward group), you would have to imagine lineup changes are around the corner.