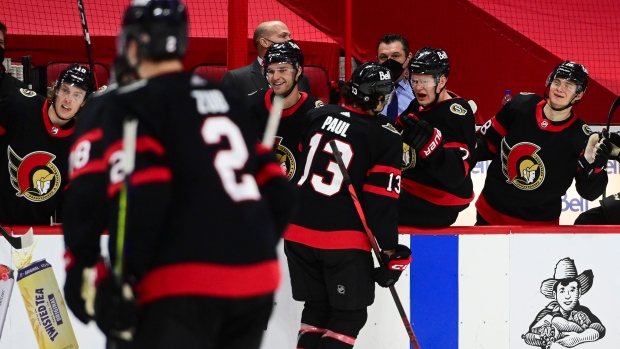 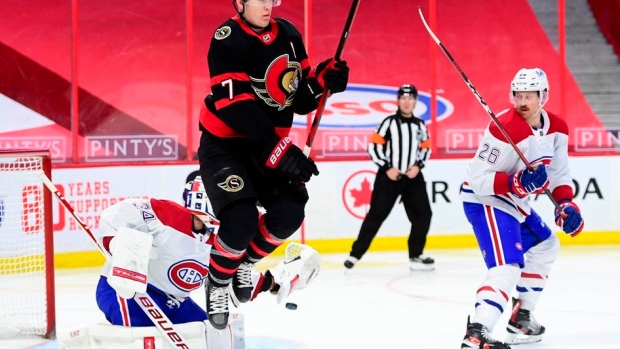 OTTAWA — With blue-line leader Thomas Chabot and veteran defenceman Josh Brown out for the rest of the season, Ottawa Senators head coach D.J. Smith said it will be a "trial by fire" as his young defence corps try to fill the void.

On Wednesday, that defence was a major part of a dominating win over Montreal that stalled the Canadiens' furious charge toward the post-season.

"I think we committed to coming back as a group of five to try to limit the chances against, and I thought we did a good job of that," Smith said. "We blocked the shots when we had to, and we tracked and didn't give up a lot of odd-man rushes, and when you do that you have a chance to stay in the game."

The Canadiens entered the contest looking for their first four-game winning streak of the season after reeling off three straight come-from-behind victories.

Montreal's penchant for playing with fire bit the club this time, however, as the speedy and determined Senators controlled much of the play and put the Habs away in the third period.

Brady Tkachuk, Nick Paul, Connor Brown and Alex Formenton also scored for the Senators (21-27-5), who improved to 8-2-1 over their last 11 games.

Joel Edmundson had the goal for the Canadiens (24-19-9), who fell two points back of Winnipeg for third spot in the North Division after the Jets defeated Calgary 4-0 on Wednesday. Montreal has the fourth and final playoff spot in the North all but locked up but stumbled in its push for a more favourable playoff matcuhup.

"Overall, I don't think that was a very good game for us," Canadiens defenceman Jeff Petry said. "The start, the middle and the finish."

Anton Forsberg, who signed a one-year, US$900,000 extension earlier Wednesday, made 30 saves for the Senators.

Forsberg was playing in his first game since April 12 due to a lower-body injury but didn't appear rusty in his return.

"Forsberg was outstanding," Smith said. He just looked so confident. He worked to get pucks for us back there wire-to-wire."

Jake Allen made 29 saves for the Canadiens.

It was the last meeting of the season between the rivals, with Ottawa finishing 6-3-1 against the Habs.

Pinto opened the scoring at 11:35 of the first period. The Senators were rewarded for some strong forechecking by getting possession of the puck, and Pinto was in a great position to collect the rebound of a Zub shot and put the puck past Allen.

"I wasn't gripping the stick too tight but I definitely wanted to get my first one pretty soon," Pinto said. "I'm happy it came and hopefully I can just keep building from there."

The Senators almost doubled their lead shortly after when Allen was caught way out of position after an aggressive move to catch the puck went wrong, but he was able to recover an dive into the path of Chris Tierney's shot.

Edmundson tied the game with 32 seconds left in the first period when he beat Forsberg on the short side following a face-off win. Nick Suzuki picked up an assist to extend his point streak to seven games (four goals, seven assists)

Ottawa went back in front at 3:44 of the second period on Tkachuk's 17th goal of the year. Josh Norris set Tkachuk up with a pass from behind the Canadiens goal.

Paul put Ottawa up 3-1 with just eight seconds left in the second period when he tipped Brannstrom's shot past Allen.

Brown added to Ottawa's lead with his 19th goal of the season when he one-timed Zub's pass past Allen at 4:40 of the third period.

Formenton, who left in the second period favouring his arm before returning in the third, made it 5-1 at 10:19 of the third when he raced down the right wing, then cut inside and beat Allen.

Linesman Steve Barton left the game in this third period after being hit in the face with the puck.

The Senators were 0-for-2 on the power play, while the Canadiens failed to convert on their lone chance with the man advantage. The mild-mannered game featured a total of 10 minutes in penalties, a far cry from the 141 penalty minutes amassed in the Washington versus New York Rangers game that took place at the same time.

This report by The Canadian Press was first published May 5, 2021.