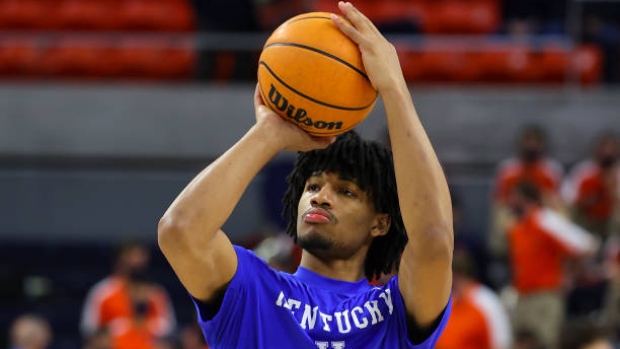 Two Canadians could hear their names called and shake the hand of commissioner Adam Silver in the first 11 picks of the 2021 NBA Draft, according to a new mock draft from ESPN.

In the latest mock from Jonathan Givony and Mike Schmitz, London, Ont.'s Shaedon Sharpe goes at No. 6 to the Portland Trail Blazers, while Bennedict Mathurin of Montreal heads to the New York Knicks at No. 11.

If that were to happen, it would be the first time two Canadians were selected as lottery picks since 2014 when Andrew Wiggins of Vaughan, Ont. went first overall to the Cleveland Cavaliers and Mississauga, Ont.'s Nik Stauskas was taken at No. 8 by the Sacramento Kings.

Sharpe, 18, declared for the draft last week. The talented shooting guard graduated high school early to join Kentucky in the fall, but never played for John Calipari's Wildcats. Despite Sharpe's declaration, Calipari says he's still trying to convince Sharpe to return to Lexington for next season.

"All I can tell you is he may do this, but it is not done," Calipari told Dan Issel and Mike Pratt on ESPN 680 in Louisville this past Friday. "Nothing has changed in the last two months about how we're going about this. I'm talking to his mother and father, and we're talking once a week. I'm not overbearing with the stuff, but they will play a part in this."

But ESPN's Jeff Borzello reported last week that Sharpe intends to remain in the draft, despite enrolling for the spring semester in school.

Shaedon Sharpe plans to stay in the NBA draft and not return to Kentucky, sources confirmed to ESPN. Former No. 1 prospect in the 2022 class, enrolled at Kentucky for the spring semester, but won't end up playing a minute for the Wildcats. Elite guard and surefire lottery pick.

Should Sharpe end up with the Blazers, he would make up one half of a dynamic backcourt alongside perennial All-Star Damian Lillard.

If Mathurin were to go to the Knicks, he could play on the opposite wing of Mississauga, Ont.'s R.J. Barrett.

The NBA Draft is for June 23 at the Barclays Center in Brooklyn.

Gonzaga big man Chet Holmgren is widely expected to be taken with the first overall pick.