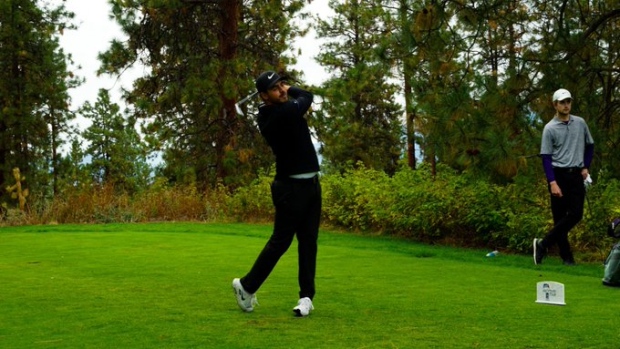 KELOWNA, British Columbia—Etienne Brault enjoyed a mistake-free round to kick off the GolfBC Championship, the first of two stops on the BC Golf Swing to finish the 2021 Mackenzie Tour – PGA TOUR Canada season. The Mercier, Quebec, native collected six birdies en route to a 6-under round of 65, good for a one-shot lead over a trio of golfers; Will Barnett, Yi Cao and Sang Lee.

“I putted great today,” said Brault. “It’s good because that’s been my weakness this year. I’ve been hitting the ball great and wedging it OK, and putting, not so great. Today it was good to flip it around.”

There is still plenty of golf to be played this week at Gallagher’s Canyon, but Brault clearly has his eyes on the prize.

“My goal at the start of the season wasn’t to get my card for next year, it was to get a win,” said Brault who is currently 19th on the points list. “I’m still looking forward to it. I had a good first round, three more to go. If I play like I did today, I’m going to have a pretty good chance.”

Australia’s Barnett, who now makes his home in Coquitlam, British Columbia, continued his strong play after tying for third at last week’s ATB Financial Classic in Calgary. His 5-under round of 66 included a stretch of seven straight 3s, beginning at No. 11. He posted a back-nine score of 29.

“Yeah, the back nine was pretty special,” said Barnett. “Unfortunately, I actually missed a four-footer for birdie on No. 10, which would have given me eight 3s in a row, but I’ll take seven any day.”

Delta, British Columbia’s Cao, who won the summer series’ Points list in 2020, is also one shot back after the first round. His scorecard included seven birdies.

Lee, of Calgary, finished his round late in the afternoon, and despite the tight, tree-lined fairways, he decided to attack the golf course, finishing his bogey-free round with five birdies.

“I was hitting driver on a lot of holes where guys would maybe not,” said Lee. “I just feel like given the situation of how the points are pretty top-heavy, I’m not really worried about anything besides getting inside the top five and winning the tournament.”

Cambridge, Ontario’s, Brendan Leonard, currently second on the points list, sits alone in fifth place, with a 4-under round of 67