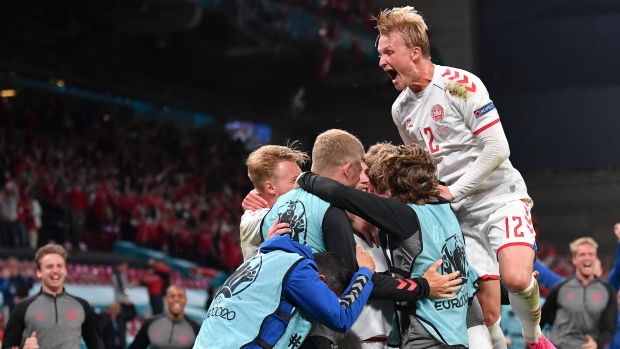 Denmark stormed their way into the Round of 16 on Monday as they beat Russia 4-1 to clinch second place in Group B.

Three second-half goals provided the margin of victory for Denmark in front of their home fans at Parken Stadium in Copenhagen.

Their progression to the knockout stage was confirmed with the win and Finland’s 2-0 loss at the hands of Belgium.

With Denmark already leading 1-0 on the strength of a first half marker from Mikkel Damsgaard, Yussuf Poulsen doubled their advantage when he intercepted a Roman Zobnin back pass and broke in all alone on the goal in the 59th minute.

“Every now and then you get lucky and the ball just lands right where you're standing,” Poulsen said after the victory. “I think it's the first time in my life I didn't track back, and then I'm handed a gift.”

Russia got back into the game when Artem Dzyuba converted a penalty, but their reprieve would not last 10 minutes.

In the 79th minute, after Russian keeper Matvey Safonov made two quality saves, Andreas Christensen got on the end of the ball from outside the box and blasted it home to restore Denmark's two-goal lead.

Joakim Maehle would complete the scoring in the 81st minute to secure advancement for Denmark.

Russia falls to fourth in the group with the loss and are eliminated from the tournament.