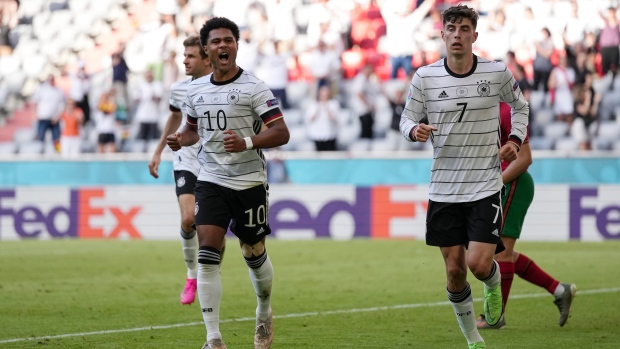 It appears that rumours of Germany’s demise might have been greatly exaggerated.

The Die Mannschaft roared to life last Saturday with an impressive performance over a shell-shocked Portugal to put themselves on the precipice of the Round of 16 for the fourth straight Euro and the 10th time in the 13 Euros in which they’ve competed. To do that, Jogi Low’s team needs a single point from their final fixture against Hungary in Munich. But that could be easier said than done against a Hungary team that has shown nothing but fight in its previous two matches.

Coverage of Germany vs. Hungary begins at 2pm et/11am pt on TSN2 and streaming on TSN.ca, the TSN App and TSN Direct.

While Hungary ultimately couldn’t hold out for 90 minutes against Portugal in a Matchday 1 loss, a brave display last Saturday frustrated World Cup holders France in a shock 1-1 draw that gave the Magyars life in the tournament. In order to move on to the knockout round, Hungary will be forced to pull a major upset and defeat the three-time Euro champions on their home turf. Anything less and the Magyars go home.

Still, they’re up for the challenge.

“The whole team is unified, I must say,” Hungary defender Attila Szalai said. “So the guys have a very good mentality: everyone fights for one another and we do everything we can to leave the pitch as winners."

Manager Paolo Rossi says that Hungary still having the ability to qualify for the Round of 16 is a testament to his players.

“We play against three teams that may get to the semifinals and play in London,” Rossi said. “Our group has been called a ‘Group of Death’ and evidently the one to fall there is Hungary. In theory, it's hard to disagree with someone making such a prediction.”

For Die Mannschaft, Hungary’s efforts at Euro 2020 have opened their eyes at how difficult a proposition this match will be.

"They have produced some remarkable performances already,” Bayern Munich’s Leon Goretzka said. “Hungary bring a lot of passion and they have a solid defence which is not easy to beat. We will look at how they have defended so far and will try to come up with a plan."

Germany enters the match with a number of injury concerns. RB Leipzig defender Lukas Klostermann has already been ruled out of Wednesday’s match with a thigh injury. Ilkay Gundogan, Mats Hummels and Thomas Muller are also dealing with injuries with the latter missing Tuesday’s training.

Die Mannschaft are still uncertain of their finish in Group F. A win coupled with a France loss or draw means Germany finishes atop the group. A France loss and a Germany draw would put Die Mannschaft in third. They would also finish in third with a loss to Hungary and a Portugal loss to France.