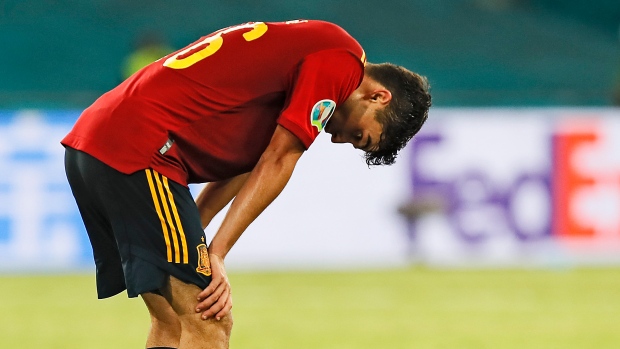 Spain heads into its second matchday fully aware that possession doesn’t mean everything in the game of football. Look no further than their Euro 2020 opener against Sweden. In that encounter, Spain held a whopping 85 per cent of possession, but couldn’t do anything with it in what was a bland, scoreless draw.

While Sweden didn’t seem too intent on scoring, La Roja couldn’t buy a goal, with Morata failing to convert on a number of good chances that raised the ire of the home fans in Sevilla. Still, manager Luis Enrique is sticking behind his embattled striker, who this week extended his loan with Juventus for another term.

"For me, Morata is a great player who does many good things in attack and defence," Enrique said. "He didn't score, but that is something he has to deal with. He is used to it. It is much easier when the fans are on your side."

Manchester City defender Aymeric Laporte hopes the match against Poland will give Morata the chance to silence his critics.

"Maybe he'll play the next game, score three goals and shut everyone up, as he works a lot for the team," Laporte said.

For his part, Morata knows he just needs to keep looking forward.

"The big thing is not to think too much about the past,” the 28-year-old Morata said. “It's gone. The Sweden game didn't go as I wanted and I have to accept that. The next day you just work harder to ensure that next time you'll put it away and win."

Enrique’s team will be buoyed by the return of Sergio Busquets. The Barcelona midfielder and Spanish captain is back with the squad after having gone into COVID-19 isolation. Still, it’s unlikely that the 33-year-old Busquets jumps right back into the starting XI.

On the other side of the pitch, Spain’s opponents are looking forward after their opening fixture got away from them.

After falling behind on a Wojciech Szczesny own goal in the first half, Poland stormed out of the gates in the second and got back on level terms almost right after the restart through Karol Linetty. But Grzegorz Krychowiak’s second booking of the match in the 62nd reduced Poland to 10 men and only minutes later, Inter defender Milan Skriniar found a winner for Slovakia.

"Looking back, despite the fact we had control of the match,” Bayern Munich and Poland striker Robert Lewandowski said. “We lost the [first] goal, which could have unsettled us. But in the second half, when we scored so quickly, we really believed we could score again and win. The turning point was definitely the red card. The match was certainly painful for us. We were very disappointed and angry, because we could definitely have taken more out of the game.”

Knowing that the effort was there, the Poland captain says they enter the match against Spain aware of the immense challenge, but confident of meeting it.

"We are not afraid,” Lewandowski said. “We understand that we need to show up with maximum commitment. We need to be disciplined, to treat this match as if it were our last. If we play as a team, really fight for every ball and go into every challenge, then we might have a chance."

As for the history between these two teams, it’s been a very one-sided affair. Spain is 8-1-1 all-time against Poland with their only loss coming in 1980. The two teams have not played each other in over a decade. Last time out, Spain thrashed Poland 6-0 in a summer 2010 friendly.