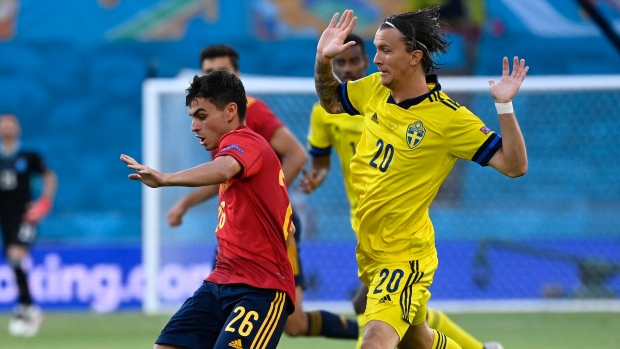 Three-time champions Spain were frustrated by Sweden in a scoreless draw to open up their Euro 2020 campaigns from Sevilla in Group E action.

Despite waves and waves of attack and dominance in possession, Luis Enrique's side couldn't find the final ball to beat goalkeeper Robin Olsen.

Olsen's best save of the match, perhaps, came in the 90th minute when Gerard Moreno split a pair of defenders to meet a Pedri cross with a glancing header that was smartly kept out by the Everton man. Minutes later, a curling Moreno effort from inside the area missed the far corner.

Spain had a glorious chance to win the match in stoppage when Pedri sprung Barcelona teammate Jordi Alba down the left side with a step on his markers. He delivered a beautiful cross across the face of goal, but Pablo Sarabia could only harmlessly deflect it directly at Olsen.

Spain's pressure was relentless for much of the match, enjoying 85 per cent of possession and over 900 touches, but central defenders Victor Lindelof and Marcus Danielson were stalwart in front of Olsen, rendering many of Spain's ventures into the area nothing more than probing, rather than menacing.

To illustrate how one-way the traffic was, Sweden managed a single shot on target over the duration of the 90 minutes.

The match's final whistle was met with groans from disappointed Spanish fans.