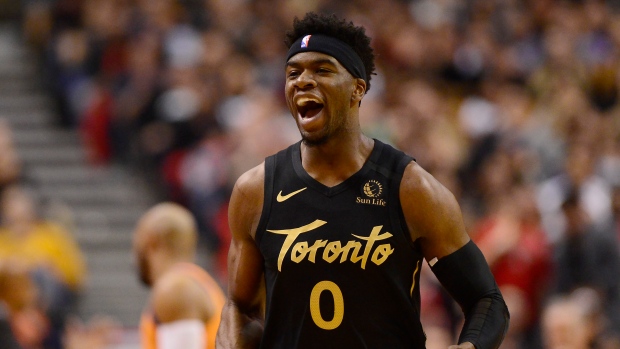 TORONTO – Raptors rookie Terence Davis II watched last week’s NFL draft from his mom’s place in Nashville. There was a time when he dreamt of being on that stage – or, in this case, videoconference – with the best young football players in the world. It could have happened, too.

A native of Southaven, Mississippi, Davis was a star wide receiver in high school. He had more than 20 scholarship offers to play football in college. Instead, he dedicated himself to his “first love”, basketball.

Among the reasons for his decision was the challenge. He thought the game, and becoming great at it, would push him further than football ever could. After struggling in his freshmen season at Ole Miss, he thought he might have made a mistake.

“I was already getting backlash for not deciding to play football from friends and colleagues,” Davis told TSN back in October. “That’s when I really told myself that I can’t let these people be right. I really locked in on getting in the gym and getting better and putting the effort and the time into the game of basketball.”

He hasn’t looked back since. Even with his first NBA season on pause due to the COVID-19 pandemic, the 22-year-old guard is still find ways to get better. He’s still working to prove himself.

Davis was in Toronto when Rudy Gobert tested positive for coronavirus and the league swiftly suspended play on March 11. After he and his teammates – who were in Utah to face Gobert and the Jazz a few days prior – tested negative and fulfilled their precautionary 14-day quarantine, Davis went to Miami with Raptors centre and fellow rookie Dewan Hernandez.

Hernandez, who is from the area, had a contact that could get them access to a private gym. Going for runs in Florida sunshine was an added bonus, you would imagine. Mostly, Davis just needed to get back on the court. This was the longest he had gone without touching a basketball since he was six.

From there, he flew to Nashville so he could be with his mom and 10-month-old son. He still has access to a private gym and he’s still getting his daily workouts. Usually, it’s just him, a trainer and maybe one other person to rebound as he gets shots up.

He made sure to stay in shape while he was in quarantine – riding the stationary bike, lifting weights and exercising – but none of that could replace his regular routine.

He’s not just working out, he’s working out with a purpose. He doesn’t know when or if the season will resume, nobody does, but whenever it’s time to get back to work he wants to be ready.

“I want Fred [VanVleet], I want Kyle [Lowry], I want these guys to be able to trust me when I get in the game in the playoffs, if I get in the game during the playoffs,” Davis said on a conference call Wednesday afternoon. “So that’s why I’m in the gym right now, that’s why I’ve been in the gym everyday at 12:00 getting weights in. I want to be in the best shape and I just want to be able to be trusted so I can show [my teammates] that I’m ready to be part of you guys.”

He has already come a long way in that regard. The Raptors signed Davis as an undrafted free agent in Summer League last July. With Kawhi Leonard and Danny Green gone there was opportunity to be had – which is one of the reasons Davis chose Toronto – but he would have been very low on the totem poll when the defending champs opened training camp in September.

As camp went on, Davis started turning heads and rocketing up head coach Nick Nurse’s depth chart. He was in the rotation on opening night and, aided by the team’s many injuries, he was the only Raptors player to appear in all 64 games.

He had some growing pains along the way and hit the rookie wall on at least a couple occasions, but thanks to his work ethic, hard play, maturity and approach – all well beyond his years – he never seemed out of place in Toronto’s veteran-heavy locker room.

VanVleet, who sits at the stall to his right, took a quick liking to Davis, on account of their similar NBA backstories. Serge Ibaka become a mentor to the young guard – guiding him through post-game workouts at the arena and encouraging him to eat healthier. Davis absorbed advice from his teammates like a sponge, and it’s paying off now that he can’t be with them everyday.

“The things that I saw them do on the daily, them leading by example, I picked up on some of those things,” he said. “So I kinda know what it is I need to do in the gym and outside of the gym — like eating right and things of that sort. If there are some questions that I need to ask I can pick up the phone and call them, but they pretty much have got me on the right track as far as doing things on the court and taking care of my body."

This last year has been a whirlwind for Davis. He’s not even quite sure how many games he played – it’s 64, as Raptors director of communications Jennifer Quinn had to remind him during the call.

His dream of getting drafted into the NFL never came to fruition, of course, but neither did the goal of hearing his name called at the NBA draft. Davis went unselected last June, thanks in part to his decision to turn down two-way offers from teams situated towards the end of the second round. He knew he could do better and wanted the opportunity to chart his own course.

Now, as he waits for normalcy to return, he’s had the chance to reflect on where that path has taken him. Choosing basketball panned out, clearly, but so has his decision to – borrowing VanVleet’s mantra – “bet on himself."

“I’ve definitely had time to reflect on a lot of things,” Davis said. “I would say that the decision I made was definitely the right decision. No doubt about that, because look at how things turned out. I played in every single game this season. I thought that I would be in the G League for at least half of the season and come first game of the year I’m playing 15 minutes opening night. Like, man, it happened so fast.”

If the season can’t be salvaged, Davis said he would be “devastated” to miss out on what would have been his first NBA playoff experience. That’s where he could have really proven himself, where he could have really earned the trust of his coaches and teammates – on the big stage. Still, he’s at peace with his rookie year and is proud of how he’s come out of it – as both a basketball player and a young man.

“I just learned that a lot of things are capable of being accomplished, you just have to work and have the attitude and faith to accomplish it,” he said. “As a person, like, I believe more. I’m starting to believe in myself more."