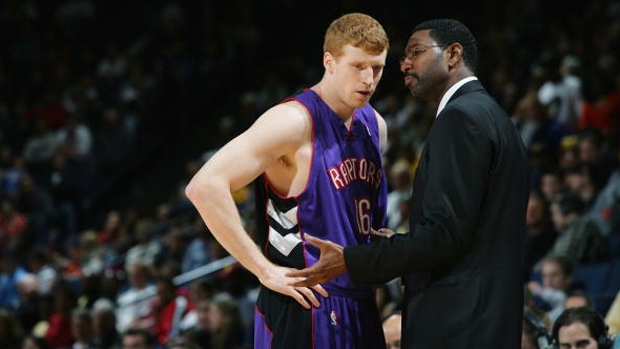 Matt Bonner, known affectionately as "The Red Rocket" during his time in Toronto, is retiring from the NBA.

The 36-year-old announced the news in a humorous video posted on The Players Tribune on Friday.

Bonner made his debut in 2004-05 and played his first two seasons for the Raptors before he was traded to San Antonio in the deal that brought Rasho Nesterovic to Toronto. He was beloved in Toronto for his humble, good-natured demeanour, and garnered his "Red Rocket" nickname when he revealed he was a regular user of Toronto's mass transit system.

One of his most popular moments as a Raptor was when future Hall of Famer Kevin Garnett tried to fight him after he knocked down Garnett with a flagrant foul. Bonner was ejected and the Air Canada Centre gleefully ushered Bonner off the floor with a standing ovation and chorus of cheers. Bonner high-fived fans on his way to the locker-room.

Bonner met his Canadian wife while playing in Toronto, and was also unsuccessful in a bid to become a Canadian citizen in order to play for Canada's national team.

He went on to win NBA championships with the Spurs in 2007 and 2014, plying his trade as a lethal three-point shooter.

In his retirement video, Bonner makes the announcement to an empty press conference room "Live from Concord, N.H.," while eating a sandwich. A custodian slowly sweeps the stage behind him. The sounds of crickets play.

The custodian pauses sweeping to say in a New England accent: "Bonnah? I thought he retired yee-ahs ago?"

Bonner gives a shout out to "The T-Dot" (Toronto) and "The Hammer" (Hamilton) and "everywhere else in Canada," and "anyone else who supported me in any location you did so."

Bonner averaged 5.8 points and 3.0 rebounds over his 12 NBA seasons.