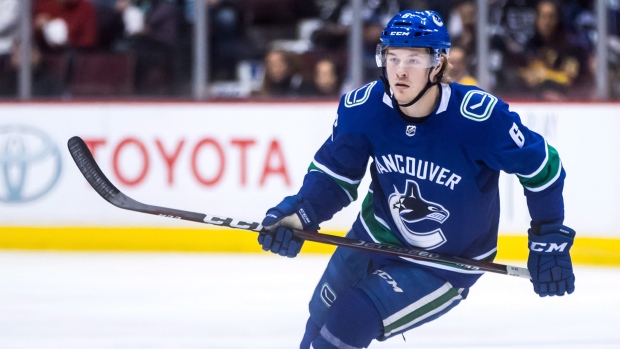 If there’s one reason for Vancouver Canucks fans to be excited heading into the 2018-19 season, it’s the presence of winger Brock Boeser in the lineup.

Boeser put up a wondrous rookie season last year, with 29 goals and 26 assists (55 points) in 62 games. Vancouver had reasonably high expectations for Boeser – he was taken 23rd overall in the 2015 NHL Draft – but I’m not sure anyone, including the very optimistic general manager, could have seen last season coming – especially on a team that was otherwise completely ineffective in the offensive zone.

The spotlight will be substantially brighter next year. It’s not very often that a prospect enters the league and immediately has that kind of attacking success. Defences will surely give him more attention and expectations will be higher. Because of that, I think there’s a question about whether or not Boeser will be able to sustain the success he had during his rookie season.

One of the things I like to do – particularly with younger players – is create similarity scores. It’s sometimes hard to digest so much information and make a reasonable conclusion about what a player’s season actually looked like. Generating comparables can help by giving us a mathematical frame of reference.

We know Boeser had a strong rookie season. But how strong was it? And, after his 62-game campaign with Vancouver, to which players around the league does he compare?

There is a bunch of ways of creating similarity scores or comparable player profiles. I prefer to create a series of z-scores – the number of standard deviations from the mean a data point is – for a series of statistical measures. In the immediate case, I referenced measures related to individual player production (think scoring rates, shooting percentages, penalties drawn, shot generation) and on-ice performance (how shots and goals fell with the player on the ice, deployment, etc.). Then, I created quick lookup tables to match players with comparable statistical backgrounds.

Any time half of the table is littered with all stars and end-of-year trophy candidates, it’s probably a good story. The player who most closely compared to Boeser was none other than Winnipeg Jets super sniper Patrik Laine, though it should be noted that Nikita Kucherov, Rickard Rakell, Phil Kessel and William Karlsson are also in that top 10. Again, these are descriptive measures – any time a player blows up in a season like Boeser did, he’s going to have some very favourable comparables. But what’s interesting is how many of these big goal-scoring names get into the top 10.

I do think that those four names in particular hit the table because (a) they were high-end individual scorers; but (b) had average or slightly above average on-ice numbers. I think that makes sense. Boeser’s season was much more about his scoring rates than his ability to drive play, so naturally a lot of his comparables fit a similar mould.

I also included the players least comparable to Boeser for fun. I’m not sure how much we can take away from that other than the fact that a lot of those names are defensive specialists who will probably never compare to Boeser.

On the Laine point – I think he is clearly a top-end comparison for Boeser, even at the age of 20. Laine’s been able to put together two ridiculous opening seasons on top of his pre-NHL draft production, and I think we have relatively much more confidence today in Laine being a star than Boeser. Either way, I was curious to see Laine’s comparables and if Boeser would be in the top 10 there as well. Here’s Laine’s table:

A perfect match! Perhaps the more interesting thing is there seems to be a three-way grouping here between Boeser, Laine and Alex DeBrincat. Chicago obviously had a disastrous season but DeBrincat was a huge story. If the Blackhawks were even close to competitive last season, I’m guessing he’s getting a lot more national attention.

I’m pretty convinced Boeser, one year in, is going to be a major impact player in the NHL. It’s awfully difficult to have that level of production in a rookie season (on a bad team), and these seasons tend to be very indicative of future performance. His statistical comparables last season only strengthen my confidence.