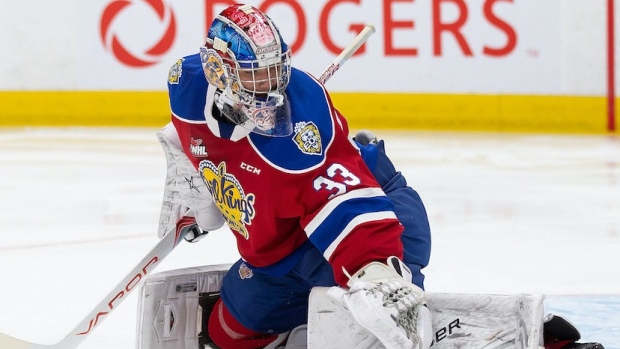 For the first time since 2012 when Andrei Vasilevskiy (19th to Tampa Bay) and Malcolm Subban (24th to Boston) heard their names called on the opening night of the National Hockey League Draft, we could see two goalies picked in the first round.

TSN director of scouting Craig Button has Wallstedt at No. 7 and Cossa at No. 15 on his latest list of top prospects. Being the first goalie picked  would be meaningful for Cossa.

"I like the pressure of it," he said. "There comes quite a bit of pressure with that so, obviously, I'd use that as motivation. It would be cool."

And Cossa, who posted a .941 save percentage last season, believes he's earned the distinction.

"Yeah," the 18-year-old said succinctly when asked if he thinks he's the best goalie in the draft. "Yeah, I do."

Cossa spoke with TSN about his style, NHL role models and how he uses his size to his advantage. The following is an edited transcript of the conversation.

What do you enjoy the most about being a goalie?

"No. The more pressure, the better I play."

How do you deal with the mental side of the game?

How would you describe your style?

"Pretty technical. I take a position and my angles are very serious and then I track the puck very well."

Who are your NHL role models?

"Carey Price and Pekka Rinne. Carey Price because of how calm and cool he is. He just makes the game look so easy. And then Pekka Rinne, who just retired, is more my size and how well he moved in the crease, I really looked up to."

You're listed at 6-foot-6 and a half, is that accurate up to the moment?

Are you done growing?

"Hopefully. I got some pretty big feet. I hope I quit growing now. I got the size."

Sometimes taller goalies need time to learn how to move efficiently, but you've figured that out pretty quickly.

"Being a bigger goalie there's going to be bigger holes, but my goalie coach hammered in tracking and shutting down those holes. Being bigger, that's only going to help me now. Staying athletic and being able to move and staying flexible with my size is really key."

You posted a 17-1-1 record last season in the WHL so the obvious question is: what happened in that one regulation loss?

"(Laughs) I want it back. Yeah, two goals I want back and we could've won the game 2-1. So, yeah, I wanted a couple goals back there."

What are you most proud of when it comes to your season?

"The beginning of it. I went on a 12 game win streak and broke Tristan Jarry’s [franchise] record so that accomplishment is pretty cool. It's a team record, but with Jarry in Pittsburgh now it's pretty cool."

Did you hear from Jarry?

Where did your game grow the most this season?

"The confidence in my game skyrocketed. I've always been a confident goalie, but just the consistency of my game [was there]. When I simplify my game and I'm tracking the puck well and seeing the puck, the game seems to be easier for me. So, it's just staying consistent."

I get the sense you don't get rattled by much, but are there any questions you get asked during NHL team interviews that make you raise your eyebrows?

"Questions about what I need to work on. Those are ones you need to think about, especially mentally. Obviously, I'm a confident guy, but realizing there's always the next step and you can always be getting better in those aspects of the game."

What do you see as the next step? What are you focused on?

"Right now, I'm continuing to work on tracking, skating, puck handling, retrieving pucks behind the net. There's a lot of small details in my game as well. Obviously, being a big guy, I want to stay that way and utilize my size and not shrink down sometimes throughout my legs or chest so continuing to work on that."

How has working with True Movement in Edmonton helped you?

"It's amazing. Doing a lot of off-stabilization work, a lot of core work, a lot of hamstring, hip mobility, so my body has been night and day since I’ve been doing that.

When did you start and how did you get hooked up with them?

"Two years ago. My trainer at my gym recommended it. Carter Hart was going there, so she (Erin Baker) had quite a bit of a resume and a couple guys that were going before me. Once I went there, I got hooked."

What's the story behind your mask design?

"There's a 'Seabass' on the back, which is the nickname I’ve had since I was a kid. There's the legislature in Edmonton. But Rogan Dean, my equipment manager in Edmonton, handles most of it."

Is that the Sea Bass character, played by Cam Neely, from 'Dumb and Dumber' on the mask?

"My equipment manager loves the movie 'Dumb and Dumber' and clearly likes that scene (smile). It's been on my mask the last couple years and I guess it's not leaving any time soon."

Who gave you the nickname?

"My brother when I was about six or seven. I don't tell anyone, but everywhere I go everyone starts calling me it. It's following me around."

The World Juniors are in Edmonton again this year. What would it mean to you play for Team Canada?

"It's one of my goals, especially with it being in Edmonton and so close to home, so close to Fort McMurray. With Edmonton and all the great fans there, it would be the experience of a lifetime."

How did the Fort McMurray wildfire in 2016 impact your family?

"We left town for three months. Luckily, our house wasn't burnt down. We had smoke damage like everyone else, but very fortunate our house was still standing when we went back. But, obviously, having to leave home for three months and the uncertainty of it was pretty scary."

What did you take from the experience?

"Just understanding what you can control and what's out of your hands. Worrying about things that you can't control isn't going to do much for you so just put your head down and try to make the best out of the situation. We went down to Calgary and went to the Edge School there and had a really good time there. So, just trying to make the best out of every situation."