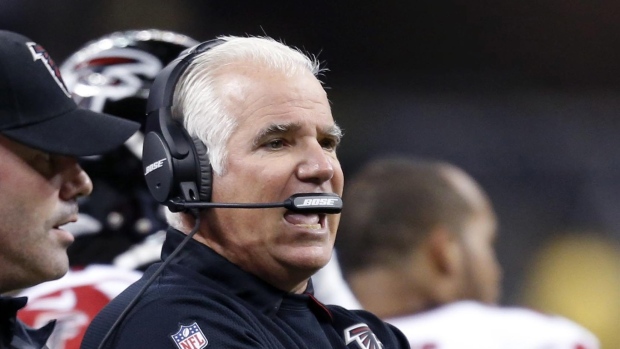 ATLANTA - Mike Smith's status as the winningest coach in Falcons history wasn't enough to save his job.

Owner Arthur Blank said he fired Smith on Monday because in his "heart of hearts" he didn't believe Smith could take the Falcons to the Super Bowl.

Smith's firing came one day after the end of his second straight losing season, capped by Sunday's ugly 34-3 loss to the Carolina Panthers before booing fans at the Georgia Dome.

Smith's 66 wins in seven seasons are the most for any Falcons coach. He reeled off five straight winning seasons for a franchise which previously had not finished above .500 in back-to-back years.

For an owner looking to the future, those accomplishments were overshadowed by the Falcons' 10-22 combined mark the past two seasons, including 6-10 in 2014. Blank acknowledged his confidence in Smith was shaken despite his affection for the coach.

"Can that individual take you to the next level?" Blank said of his appraisal of Smith. "If your answer is no in your heart or hearts, you have to put away your personal feelings."

Blank said more changes could come. He said general manager Thomas Dimitroff will be part of the search for a new coach, but then could have his status reviewed.

"Hiring the coach is the first move, but may not be the only move," Blank said, adding he has told Dimitroff "every part of our football organization will be under scrutiny. This may stop. It may finish today. It may not finish today. I don't know where we're going to end up with this."

Dimitroff, who was hired with Smith before the 2008 season, and team president Rich McKay attended Monday's news conference with Blank.

Dimitroff said he and Smith are "very proud" of five straight losing seasons from 2008-12.

"The last two years obviously have not been what we wanted," Dimitroff said. "I take a great deal of responsibility for what happens with this organization and the team building that has taken place. We think we have some good football players on this team.

Atlanta had a 66-46 regular-season record with Smith and won two NFC South titles, but it was 1-4 in the post-season.

"It's a fact Smitty was the most successful coach in the history of the Falcons franchise," Blank said.

Despite their losing record, the Falcons would have won the NFC South and hosted a wild-card playoff game by beating Carolina on Sunday.

Blank said the decision to fire Smith was not based on one game. He left open the possibility a playoff berth might have saved Smith's job.

"I had not made a decision if we had won what our next step was going to be," Blank said.

Blank said firing Smith was "the most difficult decision I've had to make." Blank said he met with Smith on Monday, and the meeting ended with an exchange of warm emotions.

"The last thing he said was 'I love you' and I said the same thing," Blank said.

Blank said he will be "in the middle" of the search for a new coach, with the assistance of the Korn Ferry search firm. The Falcons also have hired former Chiefs and Eagles executive Joe Banner as a consultant.

Blank said the search team on Monday would begin submitting formal requests to interview candidates currently coaching other teams. He said he had no timetable for hiring a new coach.

NFL rules allow interviews to be held this week with coaches — including Gase and McDaniels — whose teams are in a bye in the first week of the playoffs.

Blank credited Smith with bringing stability to a franchise rocked by quarterback Michael Vick's arrest on animal cruelty charges and coach Bobby Petrino's unexpected departure for Arkansas during the 2007 season.

Smith immediately raised expectations with an 11-5 finish in his first season, and he was the NFL coach of the year. The Falcons won 10 or more games in four seasons under Smith, including 13-3 finishes in 2010 and 2012. Smith reached 50 wins in only 71 games, the third-fastest pace since the 1970 AFL-NFL merger.

Smith was the defensive co-ordinator for the Jacksonville Jaguars from 2003-07. He was a defensive assistant with Baltimore from 1999-2002.