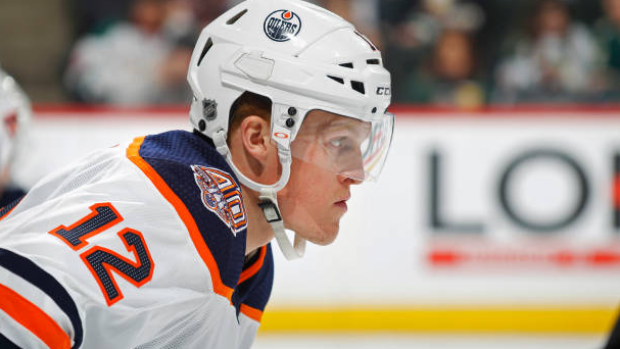 TORONTO — The way Colby Cave's personality could fill up a room is what Mark Lamb will remember most about his former star player.

Cave died at the age of 25 on Saturday after suffering a brain bleed earlier this week. The Edmonton Oilers confirmed his death with a statement from his family, sending shockwaves through the hockey world.

Lamb, who was Cave's coach and general manager on the Western Hockey League's Swift Current Broncos, says his lasting memory of Cave will always be his presence in the locker room.

"It's just his infectious smile and that he was a great person to be around," said Lamb from his home in Prince George, B.C., on Saturday morning. "That's the thing I remember about him most."

Lamb had traded for Cave during the 2010-11 junior hockey season, before he had made his WHL debut after being drafted by the Kootenay Ice. In his five years with the Broncos, Lamb says Cave matured into his ideal player, serving as Swift Current's captain for two seasons.

"He was the type of player that could do it all. He was our leader in pretty much every category on our team. He was our leading scorer. He was our best faceoff guy," said Lamb, who is now the head coach and GM of the Prince George Cougars. "He was just an all around player and probably, if he wasn't the best two-way player in the league, he was right there."

Off the ice, Lamb and Cave bonded over their shared backgrounds growing up in rural Saskatchewan. Both grew up on farms, with Lamb being raised in Ponteix and Cave coming from Battleford.

"We talked about it quite a bit, we used to joke, because hockey got us out of a lot of chores and a lot of work," said Lamb with a laugh. "My parents were the same as his. I wanted to be a hockey player and they were giving me the opportunity and so were his.

"We both talked about how we would take it to our advantage to get out of work so we could work on our hockey craft or just go play hockey. We had every excuse in the book."

Cave was placed in a medically-induced coma on Tuesday at Sunnybrook Hospital in Toronto. He had been airlifted to that facility after being admitted to a hospital in Barrie, Ont., on Monday.

He underwent emergency surgery on Tuesday with doctors removing a colloid cyst that was causing pressure on his brain. On Wednesday, his wife Emily posted an emotional update about her husband's situation.

"We need a miracle," she wrote on Instagram. "Colby's parents and myself, got to see him through a window and talk to him with a walkie talkie last night. We are no longer allowed to be in the hospital because Covid-19 rules. We have no idea when we will be allowed to see him again.

"The nurse has tied his wedding band to his ankle. I am dreaming of being able to touch you, hear your voice, squeeze your hand (3 times), and kiss you again. I love you so much, and my heart is shattered into a million pieces without my best friend."

Cave's agent, Jason Davidson, said Tuesday that the situation didn't appear to be linked to the COVID-19 pandemic.

Emily Cave posted a photo of herself clutching her husband to Instgram, saying goodbye to him in an emotional caption.

"My heart is shattered. The amount of physical, mental, and emotional pain I am in when I think about never seeing, touching, or holding you again is unbearable," said one section of the post. "You are and will always be my person, my hero, the greatest thing to happen to me.

"I never dreamed of being a widow before our first wedding anniversary. Although, every cell in my body is lost without you, I promise to continue to make you proud."

Lamb felt deeply for the widow and family of his former star player.

"It's gut wrenching, heartbreaking. It doesn't even seem real," said Lamb, who also played for the Oilers, Calgary, Detroit, Ottawa, Philadelphia and Montreal during a 403-game NHL career.

"The world is a tough place right now and it's even tougher for that family. It's just... it's so bad."

Cave scored once in 11 appearances with Edmonton this season. He had 11 goals and 23 points in 44 games with the American Hockey League's Bakersfield Condors this season.

"We wanted to express our deepest condolences to the family and friends of our teammate Colby Cave after his passing earlier this morning," said a joint statement from Oilers chairman Bob Nicholson and GM Ken Holland. "Colby was a terrific teammate with great character, admired and liked everywhere he played."

Cave played five seasons in Swift Current before joining the Boston Bruins' organization for the 2014-15 season after going undrafted. The Oilers claimed Cave off waivers on Jan. 15, 2019.

Cave had four goals and five assists over 67 NHL games with Boston and Edmonton.

"Heavy heart today," Oilers captain Connor McDavid said on Twitter. "You were an amazing person and always brought so much energy and positivity into the room and peoples lives. You will be deeply missed Caver. Sending all my love to Emily and the entire Cave family through this difficult time."

"I'm so shocked and saddened to hear this horrible news. It's hard to put my feelings into words," Boston forward Jake DeBrusk, who played with Cave in Swift Current and again in the Bruins organization, said on social media. "I was lucky to play junior hockey with Colby. He was our captain and leader. It was an unforgettable moment when we again played together in the NHL for the Boston Bruins.

"He was an amazing person, player and friend. Sending my deepest condolences to Emily and the Cave family. Rest in peace Colby."

This report by The Canadian Press was first published April 11, 2020