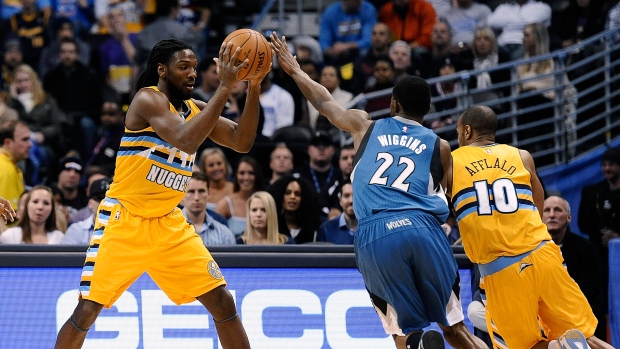 Faried had a career-high 25 rebounds to go along with 26 points, and the Nuggets beat the Minnesota Timberwolves 106-102 on Friday night.

Wilson Chandler scored 21 points for the Nuggets, who had lost two in a row. Ty Lawson finished with 16 points and 11 assists.

Faried tied the NBA's highest rebounding total this season. Dallas centre Tyson Chandler also had 25 boards in a 109-102 victory over the New York Knicks on Nov. 26.

Faried's resurgence can be traced to a meeting with Shaw this month. They talked openly about what they expect from each other, and Faried has been a different player since.

"It helped me 110 per cent," Faried said. "Now it's eased my mind. I can just go out there and play my game and not look over my shoulder and wonder if he's going to take me out or if I'm playing well enough. It's just play your game and everything else will follow."

"They ran one play for him, the first play of the game," Saunders said. "Everything else he got, 26 points, 25 rebounds, was just on his pure hustle, pure energy. He was fabulous tonight."

Thaddeus Young scored 23 points and rookie Andrew Wiggins had 22 for the Timberwolves, who have lost seven straight and 13 of 14.

Minnesota opened the fourth quarter by outscoring Denver 14-5 to take an 88-84 lead. It went up by five on a free throw by Robbie Hummel with 5:32 remaining when the Nuggets rallied.

Chandler made a running jumper and Faried had a tip-in to spark an 8-0 run that gave the Nuggets a 94-91 lead.

A free throw by Gorgui Dieng cut the lead in half with 18.7 seconds left but Arron Afflalo sank two free throws to make it 104-101.

Chase Budinger stepped out of bounds after a timeout, and Afflalo and Chandler each hit a free throw to close it out.

"We're a young team and sometimes it happens like that at the end of the game," Young said. "You just can't find a shot or you can't make a free throw, something like that."

The Nuggets led by 10 after Mozgov's dunk midway through the third quarter. But Wiggins hit a runner in the lane and a 3-pointer to help Minnesota close to 70-66.

Lawson, who was quiet in the first half, then hit a couple of jump shots as Denver pushed the lead back to eight in the final two minutes of the period.

Faried is the first player since 1951-52 to have at least 25 points and 25 rebounds while playing 30 minutes or less in a game, per Elias Sports Bureau.

"That's one of the best games I've seen him play," Lawson said. "He's playing his game like he was last year."

Timberwolves: Guard Ricky Rubio missed his 23rd straight game with a sprained left ankle but has begun basketball activities. "He did five-on-zero today, so it was the first day that he was actually able to go up and down the court," Saunders said. ... Saunders also said that centre Nikola Pekovic (sore right foot, sprained right wrist) has begun working out but is not close to returning.

Nuggets: Mozgov had 11 points and 14 rebounds. ... Forward Danilo Gallinari is expected to miss about a month after undergoing surgery to repair torn meniscus in his right knee. He missed all of last season recovering from a torn ACL in his left knee. ... Darrell Arthur was active after missing four games with a lower left leg strain.