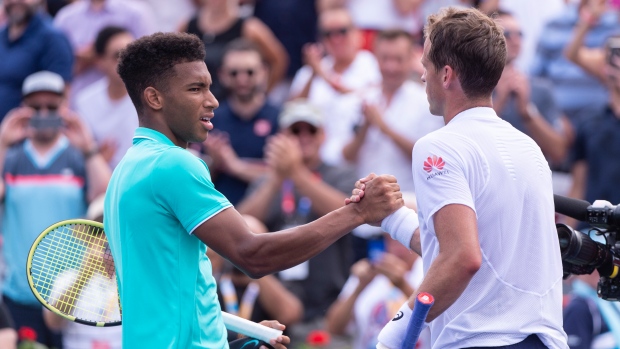 MONTREAL — Felix Auger-Aliassime has dreamed of walking onto centre court at the Rogers Cup in his hometown.

His singles debut at the tournament very nearly turned into a nightmare.

The rising Canadian tennis star got all he could handle from countryman Vasek Pospisil in Tuesday's first round before securing a dramatic 6-2, 6-7 (3), 7-6 (3) victory.

Auger-Aliassime wobbled at times, but eventually got the job done in front of an adoring crowd at IGA Stadium to advance at the US$5.7-million ATP Tour Masters 1000 series event.

"I would be lying if I was saying I wasn't scared to lose," he said. "I was very relieved when the match was over."

Coming off what he described as his worst performance of the year at the Citi Open in Washington last week, Auger-Aliassime showed fight in the face of adversity on centre court.

"There were a lot of tough moments," he said. "But I was able to deal with them in a good way."

Ranked 21st in the world to equal a career-high, the Montreal native was in complete control early, but Pospisil — 205th overall and working his way into form after a long injury absence — battled in a back-and-forth second set that saw the Vancouver product ultimately grab a hard-fought tiebreak.

With Auger-Aliassime ahead 4-3 in the third set despite a number of unforced errors, the 29-year-old Pospisil cramped up, double faulted and sent his next shot into the net.

But the 13-year pro recovered to even things, and Auger-Aliassime quickly found himself facing a dire situation down 0-30 at 4-4.

"Losing those two next points, probably the match would have been over," said the teen. "What else can you do than just give it all?"

That's what he did, staying composed and responding with four straight points to go up 5-4.

"That's something just instinctive in life," Auger-Aliassime said. "When your back is against the wall, you usually show up with something good."

In the tiebreaker with the partisan crowd urging him on, Auger-Aliassime fired a huge backhand passing shot with Pospisil serving to go up 4-2. The teen then pushed ahead 6-3 and sealed it when his opponent sent a shot long.

The Canadians shook hands and patted each other on the shoulder following a match that lasted two hours 33 minutes — much longer than most observers expected.

"He came out firing," said an exhausted Pospisil, who tumbled down the rankings after eight months on the shelf with a back injury. "Physically, I could have been better ... that definitely made a difference"

Ranked as high as 25th in 2014, Pospisil said it was tough having to play a Canadian — and a player from Montreal, no less — in the first round.

"It sucks," he said with a laugh. "It was a tough draw considering who it was, what city it was in, what country."

The pair also played doubles together for the first time Monday, falling to a French duo in straight sets.

After doing a couple of TV interviews, Auger-Aliassime was joined on court by former Expos pitcher Claude Raymond for some tennis baseball. Montreal's renovated Rogers Cup venue used to be Jarry Park Stadium, the team's home from 1969 to 1976.

With the 82-year-old Raymond pitching from roughly where the mound would have been located and Auger-Aliassime sporting an Expos jersey, the youngster hit some balls into the crowd to lightheartedly cap what had been a tense afternoon.

Auger-Aliassime will now take on 19th-ranked Milos Raonic in another all-Canadian tilt in Wednesday's second round. The 28-year-old from Thornhill, Ont., defeated France's Lucas Pouille on Monday.

The pair have only played once before, a 6-4, 6-4 decision that ended in Raonic's favour 17 months ago at Indian Wells.

But a lot has changed since then.

"I have the confidence that I can win against these type of players," Auger-Aliassime said. "I'm not as nervous stepping on these big courts.

"The overall trust in my game is much different ... we'll see what I can do."

The women's side of the Rogers Cup bracket is being played in Toronto. The tournament alternates between the cities every year.

Set to turn 19 on Thursday, Auger-Aliassime came into the afternoon showdown with Pospisil having already won 28 matches this season, including a 12-4 record in his past four tournaments.

He's reached three ATP finals in the past six months, but is still looking for that first title.

In other action Tuesday, 2014 U.S. Open champion Marin Cilic advanced with a 6-3, 7-6 (6) victory over qualifier Bradley Klahn of the United States. Seeded 14th in Montreal, Cilic made the quarterfinals at last year's Rogers Cup in Toronto before falling to eventual champion Rafael Nadal.

Nadal, the world No. 2 and top seed at this edition of the tournament, is the clear favourite with Novak Djokovic and Roger Federer skipping the event.

After getting a bye, the Spaniard opens Wednesday in the second round against qualifier Daniel Evans of Great Britain.

Auger-Aliassime entered Tuesday with a 2-0 record against Pospisil — the last of three Canadian wild-card entries to be bounced in the first round.

He beat Pospisil, who lost the 2013 Rogers Cup semifinal to Raonic in Montreal, at Indian Wells last year and again in the first round at Wimbledon in July.

"I used the crowd in my favour today," Auger-Aliassime said. "We had a great battle."