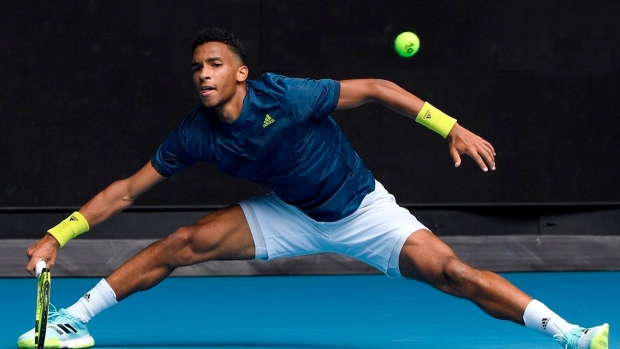 MIAMI — Canada's Bianca Andreescu needed a set to warm up before cruising into the third round of the Miami Open.

The No. 8 seed from Mississauga, Ont., downed Tereza Martincova of the Czech Republic 7-6(5), 6-2 on Friday in the second round of the WTA Tour 1000 tournament.

Andreescu fought off two break points to take the first set, overcoming 21 unforced errors in the opener compared to 10 for No. 105 Martincova.

After battling to hold serve to open the second, Andreescu took full control by breaking her 26-year-old opponent to go up 2-0 and glided the rest of the way to finish the match in one hour 52 minutes.

"I felt that in the first set I wasn't as consistent as in the second set, but I think that tiebreaker really said a lot because I started putting on more pressure," said Andreescu. "Second set, you could tell she became a little discouraged."

Meanwhile, Canada's Felix Auger-Aliassime is also heading to the third round on the men's side after the No. 11 seed from Montreal beat Pierre-Hugues Herbert of France 6-4, 6-4 in a second-round match.

Andreescu, who had a first-round bye, returned from a 16-month layoff following a knee injury in February at the Australian Open, losing in the second round.

The Canadian followed that up by reaching the semifinals of an event in Melbourne for players eliminated early from the Australian Open, but a leg injury suffered there kept her out until Miami.

"I reflected a lot on how the beginning of the year went in Australia and I adjusted with how I wanted to be on the court.... there was a lot to work on after Australia," said Andreescu.

Andreescu is trying to recapture the form of her breakthrough 2019 season when she won three tournaments, including the U.S. Open.

"I felt really good mentally out there, which was something I struggled with a bit in Australia," said Andreescu.

Auger-Aliassime, who got a first-round bye, won 81 per cent of points when he got his first serve in — well above Herbert's 59 per cent clip.

Auger-Aliassime reached the semifinals of the Miami Open the last time it was held in 2019.

"I also have a good vibe from this tournament so that always helps," Auger-Aliassime said. "I thought it was a tricky first match ... Being ready for his best, being ready for the worst-case scenario really got me prepared mentally."

Herbert, ranked 74th in the world, reached the final of a tournament in Marseille, France earlier this month. Auger-Aliassime now leads the career series between the two 2-1.

The Canadian will next face the winner of a match later Friday between American qualifier Mackenzie McDonald and No. 18 seed John Isner of the U.S. Isner beat Auger-Aliassime in the 2019 Miami semis.

No. 6 seed Denis Shapovalov of Richmond Hill, Ont., and No. 12 seed Milos Raonic of Thornhill, Ont., will play their second-round matches on Saturday.