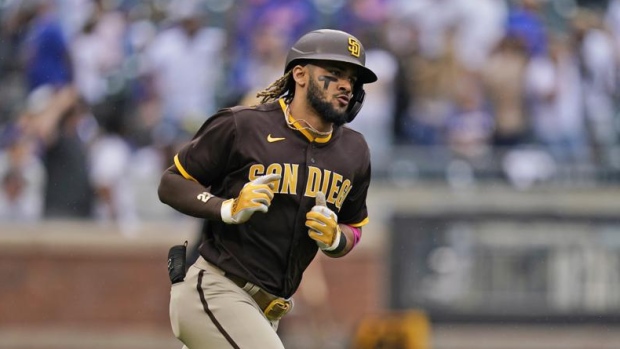 NEW YORK (AP) — Starving for a clutch hit, the San Diego Padres got two in a row from precisely the guys you’d expect.

Tatis hit a tiebreaking grand slam in the seventh inning and Machado followed with a home run as San Diego’s high-priced superstars powered the Padres past the New York Mets 7-3 on Sunday to stop a four-game slide.

“There were a lot of big moments, and obviously we’ve been fighting, scratching and struggling all at the same time,” manager Jayce Tingler said.

“One of his best starts. He was really efficient with his pitches,” Tingler said.

Shut down by New York’s stingy staff in the first two games of the series and struggling mightily with runners in scoring position lately, the Padres finally broke through against the Mets’ bullpen.

San Diego drew three walks in the seventh from a tiring Jeurys Familia (2-1), who had pinch-hitter Jurickson Profar down 1-2 before losing him with two outs. Familia then walked Pham on four straight balls, forcing in the tying run, and was pulled after throwing 41 pitches over 1 2/3 innings.

“He’s gotten a lot of big outs in his career. We felt like he could come out of there,” said Mets manager Luis Rojas, who was operating short-handed down several relievers in a taxed bullpen, plus two players on the bench who were unavailable. “It was a tough one.”

Jacob Barnes wanted a borderline 1-1 pitch to Tatis but didn’t get it, and the $341 million slugger sent the next one way out to left field for his third career slam and second this season.

“It was huge. It was a great inning from the entire offense,” Tatis said.

It was the 19th homer of the year in 49 games for the 22-year-old Tatis, who also went deep in a 4-1 loss Saturday. He began the day tied with Atlanta outfielder Ronald Acuña Jr. for the National League lead.

Tatis matched Harmon Killebrew in 1959 and Cody Bellinger in 2017 for the most home runs in the first 49 games by a player 22 or younger.

“He’s an unbelievable player. He’s got all the tools,” Rojas said. “He showed everything, right? ... This kid can beat you in different ways. Special player.”

Machado, the Padres’ $300 million third baseman, connected for his ninth of the season to make it 7-2.

“It was awesome. I was on the rail just fired up,” Paddack said.

Paddack gave up six hits and walked none in his first win since May 21. José Peraza put the Mets ahead 2-1 with a two-run homer in the fifth.

“Basically, I wanted to attack these hitters,” Paddack said. “We were on a four-game losing streak and I wanted to be the guy to stop it and get us back in the win column.”

New York starter Joey Lucchesi allowed one run and struck out six against his former team in a season-high five innings.

The Mets fell to 17-6 at Citi Field and permitted more than three runs for the first time in 12 home games.

Mets slugger Pete Alonso was hit on the bill of his helmet by a 94 mph fastball from reliever Emilio Pagán in the eighth, sending the headgear flying and prompting Pagán to put his hands on his head. Alonso, however, popped right up and appeared to be fine. He went to first base and stayed in the game.

Mets reliever Robert Gsellman struck out as a pinch-hitter against closer Mark Melancon to end the game.

Mets: RHP Jacob deGrom remains on track to make his next scheduled start Wednesday, Rojas said. The two-time Cy Young Award winner left Friday’s outing with right flexor tendinitis, but an MRI came back clean. ... 2B Jeff McNeil (strained left hamstring) went 0 for 2 with High-A Brooklyn in his first rehab game. ... RF Michael Conforto (strained right hamstring) looked really good running the bases at about 95-100% on Saturday and could begin a rehab assignment by the end of the week, Rojas said. ... OF Billy McKinney (sore right knee ) sat out for the second consecutive game but is expected to start Monday night, Rojas said before the game. ... RHP Miguel Castro developed his stiff neck sleeping on the plane. Castro wasn’t available but is feeling better, according to Rojas. “I don’t think it’s going to be that long,” he said. ... RHP Dellin Betances, on the 60-day injured list since April 8 with a right shoulder impingement, began a rehab assignment with Low-A St. Lucie. He had two strikeouts and a walk in a hitless inning of relief. ... 3B Jonathan Villar did not start because he was dealing with a family matter, Rojas said.