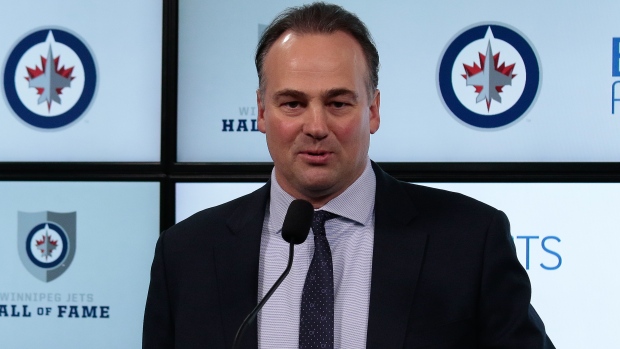 Hockey Hall of Famer Dale Hawerchuk is undergoing chemotherapy after being diagnosed with stomach cancer in August, saying he is optimistic as he battles “the fight of my life.”

The 56-year-old Hawerchuk took a leave of absence from his position as coach of the Ontario Hockey League’s Barrie Colts in early September. The team said Hawerchuk was stepping away because of a health issue but wasn’t more specific.

“For some reason the Lord put me in this kind of fight and I’m ready to fight it,” Hawerchuk said in an interview last weekend with TSN. “I want to live to tell the story.”

Hawerchuk, who grew up in Oshawa, Ont., idolizing Bobby Orr, entered the NHL with sky-high expectations after winning two Memorial Cups as a junior player with the Cornwall Royals of the Quebec Major Junior Hockey League.

The Winnipeg Jets took him first overall in the 1981 NHL Entry Draft. When he signed a five-year, $800,000 contract with the Jets that summer, an armoured car escorted by police drove to the intersection of Portage Avenue and Main Street, the city’s main intersection, and dropped off the bright-eyed, curly-haired 18-year-old. He instantly became Winnipeg’s most recognizable sports celebrity.

Hawerchuk played in the NHL for 16 years before retiring in 1997 with an arthritic hip. He played 1,188 games with Winnipeg, Buffalo, St. Louis and Philadelphia, scoring 518 goals and 1,409 points.

Winner of the Calder Memorial Trophy as the NHL’s Rookie of the Year for the 1981-82 season, Hawerchuk also played for Canada in the 1987 and 1991 Canada Cups. Hawerchuk famously won the faceoff that led to Mario Lemieux’s iconic goal late in the third period of Game 3 of the 1987 Canada Cup final against the Soviet Union.

He was elected to the Hockey Hall of Fame in 2001.

Hawerchuk said he began suffering from acid reflux symptoms in the summer. While a CT scan failed to show any cancer, doctors found a tumour in his stomach on Aug. 22. He is currently being treated with chemotherapy to shrink the tumour, which should provide doctors with the opportunity to remove it.

“The chemo has hit me pretty hard,” he said. “I do it one week and it breaks the body down and then the next week I take a break and build my body up so I can do it again. I have to do that for two months. I really struggle to eat and have a feeding tube, but the last few days I’ve been able to eat a little bit, too. You’ve got to keep your nutrition up.”

According to the latest annual report from the Canadian Cancer Society, of the 113,000 Canadians who are projected to be diagnosed with the cancer this year, an estimated 2.3 per cent (4,100) will be diagnosed with stomach cancer.

Hawerchuk said he has already talked with stomach cancer survivors who he said are now are left eating a half dozen smaller meals per day but for the most part are living “a normal life.”

Crystal Hawerchuk, Dale’s wife, says her family is rallying around her husband and that he has a mindset to beat the disease.

“He’s just so himself and low maintenance and doesn’t have a big ego. He’s just such a good person,” she said. “Dale has always been a very focused person, very determined. He’s got mental strength today just like he had in hockey...I want people to know he’s helped so many people and so many kids and it's terrible this is happening to him because all he has done is give back to the sport. There’s no better person in my life than him. He’s a very selfless person."

Dale said his family has been drawn closer together since his cancer diagnosis. His children, Eric, Alexis and Ben, are all staying close to the family home in King City, Ont.

“You don’t have anything without your health, your family and your friends and sometimes we underrate that,” Hawerchuk said. “An illness like this can definitely put things in perspective. My surgeon told me I’ve got a hell of a battle on my hands, but I’m young and healthy everywhere else.

“Like anything in life, you just got to dig in and go for what your goals are. It’s kind of no different than trying to make the NHL. Who knew if I could make it, right?”