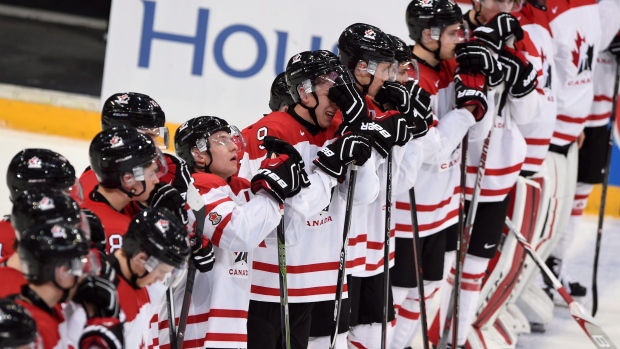 Veini Vehvilainen stopped 9-of-12 shots before being pulled near the midway point of the second. Kaapo Kahkonen turned aside 20 shots in relief.

Marner tied it 4-4 on a power play early in the third. Captain Bradyen Point passed to Marner as both came down the right side, with Point then going hard to the net. Marner's shot then bounced past Kahkonen, tucking just inside the far post.

Aho knocked in a rebound just a minute later to help Finland re-establish a 5-4 lead.

Marner kept Canada alive with another power-play goal. Point carried the puck behind Finland's net then skated out to the faceoff circle, passing back to Marner as two defenders came in on the Canadian captain. Marner gathered the puck, skated half a step out of the reach of a Finnish defender and snapped a wrist shot into the top corner of Finland's goal to tie it 5-5.

Three penalties — two to Virtanen and one to Hicketts — cost Canada, with Laine blasting a slapshot into the Canadian net for a 6-5 Finnish lead.

Konency opened scoring at 5:21 of the first. He converted on a smart passing play by linemate John Quenneville. Quenneville corralled the puck behind Finland's net and made a backhanded pass to Konency, who was skating in from the face-off circle. Konecny put his one-timer away for a 1-0 lead.

Laine cut in to Canada's lead with 11.3 seconds left in the first, bringing the hometown Finnish crowd back to life.

Kalapudas tied it 2-2 on an unfortunate gaffe by Canadian defenceman Brandon Hickey just over six minutes into the second. As Kalapudas carried the puck through the neutral zone Hickey lost his footing and fell, opening up the slot to the Finnish forward.

A shot on Finland's net was reviewed two minutes later with the referees ruling it a no goal. On the ensuing faceoff, Jake Virtanen dug the puck out to an open Crouse, who fired it past Vehvilainen to make it 3-2 for Canada.

Finland pulled Vehvilainen after that, putting in Kahkonen.

Saarela's power-play shot from outside went in on Blackwood's shortside with less than five minutes in the second to tie it 3-3. With the Finnish crowd still clapping just over a minute later Nattinen put the puck over Blackwood's outstretched glove for Finland's first lead of the game.

Hartwall Arena itself presented new challenges for Canada, which had played all four of its preliminary round games at Helsinki Ice Hall. The 8,200-seat Ice Hall was dominated by Canadian fans during the round robin, while the sold-out crowd of 13,349 at Hartwall was split about 50-50 with competing "Suomi!" and "Let's Go Canada!" chants throughout the game.

The ice itself was also different. Although the Ice Hall's rink was larger than a typical NHL ice surface, Hartwall's is full Olympic size, four metres wider than the Ice Hall's dimensions. Finland has played all five of its games at Hartwall.