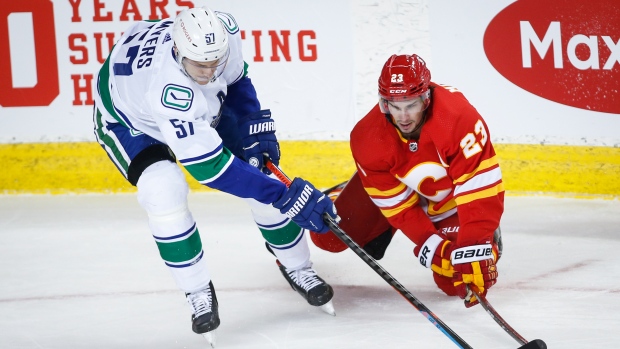 1) Saturday’s 3-0 loss to the Calgary Flames turned twice in the first 15 minutes of the hockey game. The Flames opened the scoring on their only shot of the first power play of night. Seven minutes later, with a pair of Calgary players in the box, the Canucks spun their wheels on 1:22 of two-man advantage. They possessed the puck and moved it adequately. But there are no style points awarded in the NHL. People don’t want to hear about decent looks. They want to see production and when the Canucks struck out on their 5-on-3, the template for the night had been set. Ultimately, the Flames went 3 for 6 with the man-advantage while the Canucks remain on the hunt for their first power play goal of the season. They were 0 for 4 against the Flames and are now 0 for 11 this season with 18 shots to show for their effort.

2) It goes without saying the Canucks miss JT Miller. It’s now apparent just how important the team’s leading scorer from last season is to the team overall, to the power play, and to Elias Pettersson. The Tampa Bay Lightning won the Stanley Cup without Steven Stamkos last summer so the really good teams can cover the absence of star players. But the Canucks offence has sputtered the last two games minus Miller -- and Pettersson, more than anyone, is proof of that. Despite a share of the team lead with four shots on goal on Saturday, the slick Swede just hasn’t possessed the magic in his game that he has shown in each of his first two seasons in the league. Pettersson hasn’t been able to create for his assortment of linemates and he hasn’t been able to generate on his own. Through three games, Pettersson has yet to score and has just one assist. He’s been held off the scoresheet in consecutive games now – something that happened only once in the playoffs in the Edmonton bubble last summer. It’s early still, but the biggest concern has to be Pettersson’s even-strength offense where he has just four shots on goal through the first three games. Five of his nine shots so far have come on the power play.

3) I’m sure the whole team misses Miller, but Bo Horvat might be next in line when it comes to players that are feeling the void in the line-up. The captain led the Canucks – and was tied for sixth in the league – with 12 power play goals last season. From his bumper spot in the high slot, Horvat developed into an ace finding soft spots in opposition penalty killing. And JT Miller was terrific at finding Horvat in the middle of the ice for quick strikes. Teams had to respect Miller attacking the net on his downhill side and that seemed to free up seams in the slot. Alternatively, Miller was able to move the puck down low (to Tyler Toffoli or Brock Boeser) and as the defense adjusted, Horvat was open for clean looks between the hash marks. Through three games so far, Horvat has registered one power play shot on goal. ONE. It came in the second period of Thursday’s 5-2 loss in Edmonton. Asked following Saturday’s shutout loss if opponents are taking his bread and butter away or if the Canucks simply aren’t finding him in his favourite spot, Horvat suggested it’s a combination of both. With no sign of Miller on the horizon, it’s something the Canucks have to rectify in a hurry. The power play means too much to this group (57 goals in 69 games last season) and not utilizing one of their best weapons hardly seems like a recipe for success.

4) The Canucks penalty kill has been torched for five power play goals in the past two games. That’s a dangerous way to play at this level. The Oilers struck twice on Thursday and the Flames did all of their scoring with the man-advantage on Saturday. Newcomer Travis Hamonic was on the ice for all three of his former team’s goals while Alex Edler and Jay Beagle were on for two of the three. Hamonic figures to play a key role on the Canucks penalty kill after leading Calgary in short-handed ice time per game in 2019-20. Perhaps he’s still finding his form after sitting out nearly a full calendar year, but there can’t be many more nights this season when Hamonic is on the ice for three power play goals against. On the season, Edler has been on the ice for four of the five goals the team has surrendered while short-handed. Hamonic and Beagle have been on for three apiece. Compounding the issue is the fact that Tyler Motte has been in the penalty box for three of the five goals the Canucks have allowed including the 2-0 goal on Saturday night. Motte and Jay Beagle form the team’s top penalty killing duo up front, but in order to kill penalties, Motte has to be available for selection. That’s been a problem. So has Beagle’s face-off prowess. While he was a perfect 5 for 5 at even-strength on Saturday, he won just two of six short-handed face-offs and was beaten cleanly by Sean Monahan on the first power play face-off of the night. Just 15 seconds, Monahan opened the scoring as Beagle was unable to wrap him up in the slot. The door seems like its open for Loui Eriksson’s season debut to assist with the penalty killing duties.

5) In the event Eriksson finds his way back into the line-up, the question becomes at whose expense? To that end, it’s been a remarkably quiet start to the season for Antoine Roussel. Aside from his assist on Adam Gaudette’s goal on opening night, it’s hard to recall the feisty winger leaving his mark in any way. On Saturday, Roussel did not register a shot attempt or a hit in 13:13 of ice time. His most prominent play was getting steamrolled by Milan Lucic along the side boards. Roussel had a disappointing playoffs where he was the low ice time man among Canucks forwards and was often parked in third periods of close games when Travis Green shortened his bench. Three games into this new season, the veteran forward has one point, two hits, two giveaways and one blocked shot. It’s been way too quiet around Roussel so far. If this was in isolation, then perhaps it could looked past considering there was no exhibition action after four months off. But if you go back to the late stages of last season, Roussel had one goal in his 14 games before COVID hit. He then scored twice in 17 games in the post-season. Yet to score so far this season, he has three goals in his last 34 games. It’s not all about offence with Roussel, but if he’s not contributing on the stat sheet, he needs to find ways to have a presence. That hasn’t happened yet this season. When he’s on, Roussel plays a loud game with an edge and is easy to spot on the ice. For too long now, though, he’s been hard to find. The Canucks could desperately use the energy he is supposed to provide.