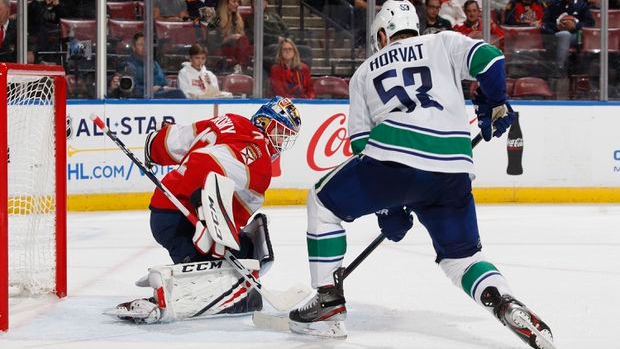 1) Let's start with the good news: the Vancouver Canucks are finished in the state of Florida for this season. After Tuesday's 9-2 debacle in Tampa, the Canucks headed south to Sunrise looking for a chance to respond to their worst loss in years. Just three minutes and one second in, however, the Canucks had surrendered two goals on two shots and found themselves in an early hole they couldn't climb out of. It was a worst-case scenario start for a team that skated on Wednesday and pledged afterward that they had begun the process of putting the loss to the Lightning behind them. But early mistakes cost the Canucks at BB&T Center and those miscues allowed the Panthers to pounce. 5-2 was the final in the game and 14-4 was the collective score in the Sunshine State. A mid-January trip to Buffalo has never looked so welcoming. Anywhere but Florida would be a preferred destination for the Canucks after these past two games.

2) The dagger in the hockey game came with just 1:07 remaining in the first period. After Brock Boeser had scored to get the Canucks on the board and give the team some life, it looked like they may escape the opening 20 minutes trailing by just one. But with Troy Stecher trapped inside the Florida line, the Panthers broke out on a 2-on-1 with Jordie Benn the lone man back. Alexander Barkov was able to slide the puck to Florida's leading goal-scorer Evgenii Dadonov who beat Thatcher Demko high on the blocker side extending the lead to 3-1. That goal seemed to crush the spirits of the visitors who never really recovered. At 2-1, the Canucks had a couple of glorious chances to tie the game. Boeser was all alone in front of Sergei Bobrovsky but was unable to convert. And then Jake Virtanen took a perfect behind the back pass from Tanner Pearson and appeared to have the upper half of the net to shoot at, but somehow was unable to find the range. Instead of the Canucks erasing the terrible start and having a chance to hit the reset button at 2-2, they got careless and sloppy and made poor decisions late in the period. First Mike Hoffman hit the post on a 2-on-1. Then Sasha Barkov was sent in all alone on a short-handed breakaway. Finally, Dadonov made the most of the Panthers third odd-man rush of the final few minutes of the period to score what proved to be the game winning goal.

3) The second period was tough to watch. Whether it was the fact they'd given up the late goal in the first or the cumulative effect of being outscored 12-3 over a four period stretch to start the road trip, the Canucks just seemed to shutdown in the second -- and not as in 'they shutdown the Panthers'. The team just kind of stalled out in the period. Antoine Roussel took a slashing penalty at the 2:43 mark and Mike Hoffman scored on the ensuing power play. At 4-1 the game was over, but there was still 37 minutes left to play. In that second period, the Canucks were outshot 20-8 and according to naturalstattrick.com, had just two even-strength scoring chances. It certainly felt that way in the building, too. There was no response of any kind from the Canucks in the second period. They showed considerably more spirit in the third period, but the second period was a write off.

4) In many ways, the loss on Thursday seemed worse that the one on Tuesday. Getting blitzed by the Bolts happened. There was nothing the Canucks could do about that game once it finished. But Thursday started as a fresh canvas and a chance to back-up the post-practice words with action. Not only were the Canucks down 2-0 early before falling 5-2, but they surrendered 49 shots on goal. In their last six games, the Canucks have allowed 51 shots to Los Angeles and 49 to Florida. In between they were outshot 37-27 by the New York Rangers last Saturday and 37-23 in Tampa Bay. Over those six contests, the Canucks have been outshot 232-173 which is a differential of -59. That's not good. On Thursday night, the pairing of Jordie Benn, back in the line-up after six games as a healthy scratch, and Troy Stecher struggled with the Canucks controlling just 31% of all even-strength shot attempts when they were out together. And the forward line of Adam Gaudette between Antoine Roussel and Jake Virtanen managed just one even-strength shot on goal all night.

5) The Canucks power play has gone three games without a goal. It's the second time this season, the club has been skunked in three straight games with the man-advantage. The Canucks had a pair of power plays in the first period when trailing 2-1 (although one was just 35 seconds in length due to overlapping penalties) but were unable to do anything with them. On the night, the club registered six shots with the power play, but outside of the Virtanen opportunity in tight in the first, the power play did not have its usual flair and while not only failing to score, it failed to generate any kind of momentum for the Canucks. Going back to the Rangers game last Saturday, the club is now 0 for its last 10 power play chances. The Canucks have been too potent this season to go a whole lot longer without finding the range, but it was interesting to see the club practice with new formations on Wednesday in Sunrise then not utilize the new looks at any point during Thursday's game. Quinn Hughes scored a power play goal last week against Chicago and another against Edmonton before Christmas. But in the last 14 games, Elias Pettersson, Bo Horvat, JT Miller and Brock Boeser have combined for exactly one power play strike -- Miller had it in a 4-1 win against Pittsburgh on December 21st. Pettersson's last power play goal came December 3rd against Ottawa while Boeser and Horvat have not found the back of the net with the man-advantage since November 21st in Nashville. Since the start of December, Jake Virtanen leads the Canucks with three power play goals. Maybe it's time to revisit a few of those formation tweaks.