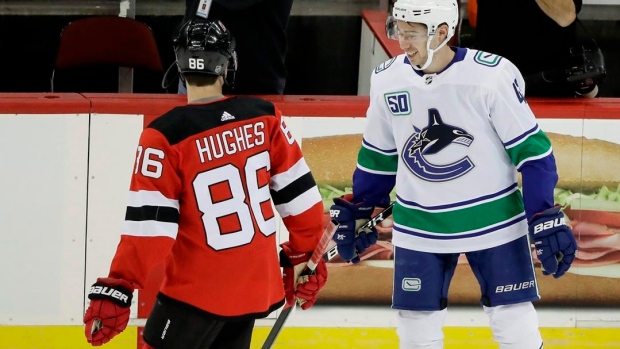 1) It's pretty obvious the Vancouver Canucks have a devil of a time with New Jersey. For the 10th consecutive meeting in this head to head match-up, the Devils came out on top. This time the first NHL goal for Jack Hughes stood up as the game winner in a 1-0 New Jersey victory. The Canucks had 25 shots on MacKenzie Blackwood, but couldn't solve the Devils netminder -- who is now 3-0 in his career against the Canucks with a pair of shutouts. The Devils also blanked the Canucks 4-0 at Prudential Center last season. The teams will meet again next month in another afternoon affair -- that one a 1pm start at Rogers Arena on November 10th.

2) The Canucks power play sunk them on Saturday. They were skunked in six full opportunities with the man-advantage. In those 12 minutes, the Canucks generated nine shots on goal -- a marked improvement from the lone shot they manufactured with the man-advantage in St. Louis on Thursday. But at this level, it's a bottom line business and shots and shot attempts may be a step in the right direction, but ultimately the power play has to score -- especially against a Devils penalty kill that had already surrendered nine power play goals and came into the game wobbling badly at 66.7% on the season. With the much-anticipated move to put Quinn Hughes on the top line occurring midway through the second period, the Canucks moved the puck well and applied pressure, but still failed to score. Brock Boeser had three power play shots, Elias Pettersson, Bo Horvat and JT Miller each had two apiece. So the top unit guys were the ones pulling the trigger. Those are the players the Canucks want in positions to shoot. But the power play is now 4 for 30 on the season with three of those goals coming last Tuesday against Detroit.

3) On the day, Elias Pettersson had the puck on his stick a lot. That is encouraging and a step in the right direction for both the player and the hockey club. Pettersson was given credit for just two shots on goal, but had 12 attempts on the afternoon. By his own admission, he's just a little off right now with just two goals in his first seven games this season -- and no goals yet through four road games. He's also still looking for his first power play goal of the season. Pettersson was particularly miffed by a missed opportunity early in the third period with the teams skating four on four. He took the puck on the side boards in New Jersey territory and circled into the slot. The defender looked like expected Pettersson to drop the puck to a defenseman and instead he held on as a wide open shooting lane unfolded in front of him. From the top of the hashmarks, Pettersson unleashed an uncontested wrist that missed the net by a few inches. He had the puck on his stick and his target selected and was unable to hit the mark. Last year, he probably scored on that chance nine times out of ten. So lots of attempts is promising, but he also has to hit the net more often. Through the first seven games of the season, Pettersson has just 11 shots that goalies have been forced to stop.

4) While Pettersson was shooting most of the game, no Canuck forward -- including EP40 -- had a shot over the final 9:21 of a 1-0 game. The team generated just two shots over that span and both were from defensemen. The final shot on goal of the afternoon off the stick of a Canuck forward was from JT Miller with 9:21 to play. Less than 48 hours after a strong comeback win when trailing by a goal going to the third against the defending Stanley Cup champs, the Canucks lacked urgency over the final period in New Jersey. You thought perhaps the win in St. Louis would serve as a reminder of what was possible when facing that situation. Apparently the lesson has already been forgotten. The Canucks generated just five shots in the final period and managed only one when PK Subban took a holding the stick penalty midway through the third. Give New Jersey credit. The Devils helped their goalie by blocking 23 Canuck shot attempts on the day. Still, the Canucks lacked the determination they demonstrated in rallying against the Blues. There needed to be more of a push from the Canucks were blanked for the second time in seven games this season after getting shutout 10 times last season.

5) It'll be interesting to see what -- if any -- line-up changes Travis Green makes for the quick turnaround before facing the New York Rangers on Sunday afternoon at Madison Square. It was not a great afternoon for many of the Canucks depth forwards. Brandon Sutter, Jake Virtanen, Tim Schaller and Tyler Motte failed to register a shot on goal. Micheal Ferland had one, but no hits in a game that saw the temperature rise midway through the second period. Josh Leivo didn't have a shot on goal Saturday and despite quality ice in the top six early in the season is sitting on just one goal so far. The shot attempts heavily favoured the Devils when any of Leivo, Virtanen or Ferland was on the ice. Suffice it to say, there are candidates to come out of the line-up if the Canucks want to make a switch and get Adam Gaudette or even Loui Eriksson back in uniform for the second half of the back to back set. One change that is likely is Jacob Markstrom returning to the crease after rejoining the team Friday and serving as the back-up on Saturday. Markstrom hasn't played since last Saturday against Philadelphia when he took a personal leave to tend to a family matter. He was in goal for an optional practice in Newark on Friday afternoon, but won't have the benefit of a morning skate with the 1pm start on Sunday. If Markstrom does get the start, it means Thatcher Demko will watch from the bench. Demko certainly did his part over the past week posting victories in his first two starts of the season and then stopped 23 of 24 New Jersey shots on Saturday. Demko did his part once again providing the kind of goaltending necessary to at least force overtime and earn a single point. Demko deserved better than the loss on the day.