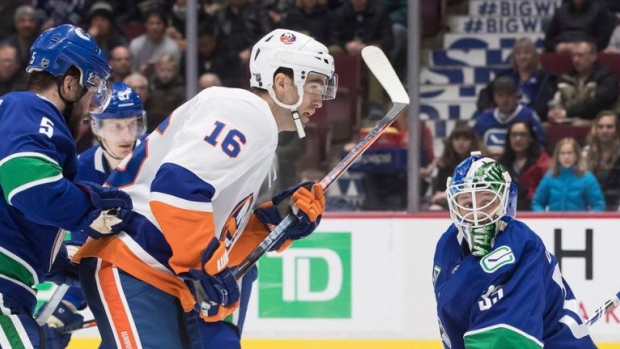 1) It really doesn't matter what they look like these days, a win is a win for the Vancouver Canucks. And Tuesday night against the New York Islanders the Canucks needed a shootout to add two more points to their pile in their quest to qualify for the post-season. With the victory, they move back above the playoff bar in the Western Conference and it allows the team to move on to Arizona for the next biggest game of the season on Thursday night. A loss would have been devastating at this stage of the season, but to their credit, the Canucks found a way to grind out the result they needed. It was incredible how different the past two games have been. On Sunday, the Canucks and Blue Jackets slogged it out for 60 minutes and produced just three goals. On Tuesday, the Canucks and Isles combined for three goals in the first 2:41 of the hockey game. On the night, the teams generated 83 shots on 146 attempts. We hear all the time how games at this stage of the season tighten up and time and space disappear. Well, that was hardly the case at Rogers Arena as the Isles outshot the Canucks 49-34 including 4-1 in overtime. The shots favoured the visitors, but the end result was what mattered most to the home team. The Canucks went 2-2 on their four-game homestand and now simply must back up the victory with another in Glendale on Thursday. It's been more than two weeks since the Canucks strung together consecutive wins dating back to a 9-3 triumph at home against Boston on February 22nd and a 4-3 overtime win in Montreal on February 25th.

2) Despite allowing four goals, Thatcher Demko was tremendous on Tuesday. He posted a career-high with 45 saves including a couple of highlight reel stops off Mathew Barzal. Demko went from post to post during an early 5-on-3 and flat out robbed Barzal with his right pad. In the second period, Barzal was the triggerman on an Islanders two-on-one, but was again denied by Demko. On the night, the pride of Coquitlam had seven shots on nine attempts and was buzzing throughout the game, but he couldn't solve the Canuck puck stopper at any point in the hockey game including as the second Islander out in the shootout. On the night, Demko was the Canucks best penalty killer thwarting all 11 New York shots with the man-advantage. With two minutes left in regulation and the outcome hanging in the balance, Demko managed to get his right toe on a point shot from Ryan Pulock that worked its way through traffic but didn't find the back of the net.

3) While it wasn't a great homestand for the Canucks, it was a tremendous late-season coming out party for Zack MacEwen. The big winger scored his third goal in three games and added four hits. His goal that gave the Canucks a 3-2 lead early in the second period was the result of his hustle to get in on the forecheck. MacEwen applied pressure and forced the Isles to hard-rim a clearing attempt. Alex Edler stepped up at the left point, beat Jordan Eberle to the puck and in the same motion got a shot away that was deftly deflected by MacEwen who had worked his way to the front of the net after the forecheck. MacEwen is up to five goals in 17 games this season. Sometimes all a young player needs is a chance. To put MacEwen's season to date in better perspective, he has five goals in 17 games. Tim Schaller scored five goals in 51 games. Loui Eriksson had six goals in 49 games. Josh Leivo, who played higher in the line-up and saw power play time, had seven goals in 36 games and Brandon Sutter has eight goals in 44 games. You wonder what might be possible if MacEwen gets a slightly longer leash and hopefully he's earning it with his performance these days on a line with Antoine Roussel and Adam Gaudette. He scored twice in a team-low 7:15 of ice time on Friday against Colorado and found the scoresheet again against the Islanders in just 7:00 of ice time on Tuesday.

4) For a game that raced back and forth through three periods, overtime was a bit of a letdown. The Islanders seemed far more concerned with puck possession than generating chances. And, as a result, the Canucks couldn't get the puck for long stretches of the 3-on-3 session. In the end, the Isles did have four shots and the Canucks only one. Although the Canucks probably had the best scoring chance of OT when Bo Horvat set up Quinn Hughes off the rush and the Canucks defender was robbed by Isles goalie Semyon Varlamov. Hughes also rang a shot off the crossbar moments after the final buzzer on a chance that clearly wouldn't have counted had it gone in as time had expired. At the other end of the ice, Jordan Eberle got a step on Horvat and had a decent look as he took the puck to the net and defenseman Ryan Pulock forced Thatcher Demko to make a solid save as he barreled in on left wing. At one point, the impatience Rogers Arena crowed booed Mathew Barzal for standing still with the puck in the neutral zone waiting for his teammates to regroup. Based on the kind of electricity Barzal generated all night, Canucks fans -- and the Canucks themselves -- should have been delighted the Islanders scoring leader wasn't in motion. It was one of the few times on the night he didn't look dangerous with the puck on stick.

5) There isn't much noise around Alex Edler these days. The veteran blueliner has settled into a second pair role with Troy Stecher and no longer plays on the power play as he did earlier in the season. But Edler had a strong night and his pairing with Stecher was the best of the Canucks three defensive duos on the night. Edler picked up a pair of assists -- his 400th and 401st NHL points -- led the team with 25:07 of icetime (and 3:19 of short-handed time), had three shots on seven attempts , four blocked shots and two hits. Since February 6th, Edler has 1+11=12 in his last 15 games with 11 of those points at even-strength. He is very quietly tied for sixth in scoring among all NHL defensemen over that span (Quinn Hughes is one of the few ahead of him with 14 points in those 15 games), but Edler is tied with the Rangers Adam Fox for the most even-strength points by a defenseman during that stretch. With 33 points now through the 59 games he's played, he is one off his point total from each of the last two seasons and seems like a certainty to establish the third-highest point total of his career and with a late surge could challenge his second highest total (42).