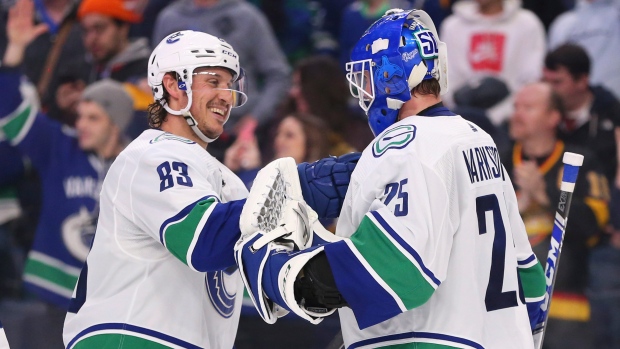 1) Greetings from Charlotte Douglas International Airport. Sure, it's an odd place to be writing a recap of the Canucks 6-3 win in Buffalo on Saturday afternoon. But despite unseasonably mid-January weather in northern New York State (it was 17 degrees celsius outside in Buffalo at the 1:00 p.m. local time puck drop) Mother Nature made it impossible to fly from Buffalo through Chicago and on to Minnesota where the Canucks face the Wild on Sunday afternoon. My flight through the Windy City was cancelled late Friday night and I was re-booked through Charlotte -- which if you look on a map is in no way en route to Minneapolis. But there were few flight options out of Buffalo on a Saturday night and with the potential of more weather issues playing havoc with travel on gameday Sunday, I opted for what I hope is the best Plan B possible. So it was a race from KeyBank Center to the airport to catch a flight four and half hours after the opening face-off. I made it with a few minutes to spare and my Saturday night adventure began. After a two-hour layover in Charlotte, I am scheduled to catch a 10:00 p.m. direct flight to Minneapolis and with the time zone change granting me an hour, I should be on the ground in Minnesota moments before midnight. It's far from ideal -- Chicago would have been a considerably more user friendly route -- but these things are out of the traveller's control. Moving about North America during the winter months is part of the job description and you have to be able to adapt and roll with the punches. And that's what today has been all about. Okay, on to hockey...

2) The Canucks were full value for their victory against the Sabres. With a pair of goals from Brock Boeser and singles from Bo Horvat and J.T. Miller, the Canucks best offensive players came to play and left their fingerprints all over the win. That's not to discount the contributions of others, but the Canucks needed a response after their two losses in Florida and they got it from their top end producers. While Boeser, Horvat and Miller have all found the back of the net with regularity this season, today was the first time since Nov. 21 in Nashville that those three had scored in the same game. The Canucks beat the Preds that night in Music City and they certainly didn't want the combined efforts of their top players to go to waste today.

3) The Canucks found a way to break a close game wide open after having that done to them by both the Lightning and Panthers. On Tuesday in Tampa, it was a 2-2 game late in the second before the Bolts jolted the Canucks with seven unanswered goals. On Thursday, after a tough start that saw them fall behind 2-0 on the first two shots of the hockey game, the Canucks answered and pulled within a goal at 2-1. Then the Panthers pulled away en route to a 5-2 victory. Saturday in Buffalo, the Canucks spotted the Sabres a 1-0 lead, but then had leads of 2-1 and 3-2 before the Sabres tied the game 3-3 early in the third. But there was resolve in the Canucks game on Saturday that wasn't there in either game in Florida. Now part of that was the fact the Sabres are reeling with just three wins now in their last dozen games. But Buffalo had answers earlier in the game, but the Canucks pulled away when Brock Boeser scored his second of the game at 6:24 of the third and Jake Virtanen extended the lead a minute and 14 seconds later. Boeser had two goals on the day and now has three in his last two outings. With plenty of talk in the market about what's wrong with the Canucks forward, I'd suggest with 16 goals and 43 points in 45 games the answer is absolutely nothing.

4) Let's be honest, the Canucks caught a break when Sabres head coach Ralph Krueger tabbed back-up Carter Hutton to start on Saturday. Hutton had not won any of his previous 10 starts (0-6-4) and carried an 89.4 save percentage into the game. The Canucks lit Hutton up for six the last time the teams met on Dec. 7 at Rogers Arena. On Saturday afternoon, they pumped five past the 34-year-old who looks like he's playing his way right out of the league. The Canucks don't need to apologize for the fact they saw a shaky Sabres netminder. They took full advantage and made the most of the opportunity. The Canucks believe goaltending is one of their team strengths regardless who they run with in a give game. On Saturday, the Canucks had the better goaltending and earned themselves a much-needed two points.

5) I liked the Canucks third period on Saturday. They pushed the pace and forced the issue. J.T. Miller's goal was the result of solid forechecking and back-pressure that forced Sabres defenceman Jake McCabe into an ill-advised turnover early in the period. Boeser and Chris Tanev worked a pretty give and go for the eventual game winner and Tyler Motte set-up a streaking Jake Virtanen with a nifty backhand pass through the slot as the Canucks turned up the heat on Buffalo and the Sabres wilted. The Canucks held a 13-10 shot advantage in the third which correctly suggests they carried the play despite an expected Buffalo push that never really materialized. According to Natural Stat Trick, the even-strength scoring chances favoured the visitors 8-3 in the third period. And a solid final frame in which the Canucks pulled away from their opponent and locked down the win should provide a little momentum for Sunday's game in St. Paul.