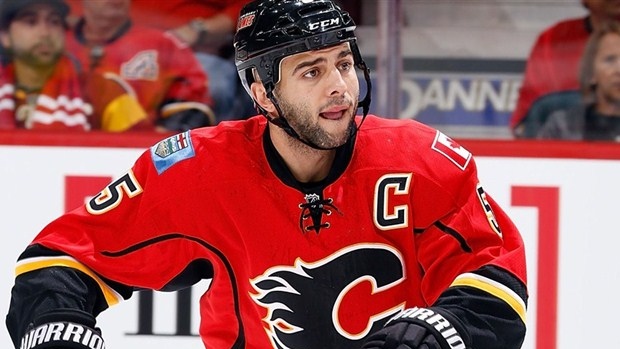 CALGARY - Calgary Flames captain Mark Giordano isn't giving up hope his team can make the NHL playoffs without him.

With the bill of his red ball cap pulled down over his eyes, Giordano spoke with local media Tuesday about the season-ending surgery he'll undergo Wednesday to repair a torn left biceps tendon.

The Flames have been scrapping for playoff position in the tight Western Conference for weeks. They entered Tuesday's game in Philadelphia in a three-way tie for third place in the Pacific Division standings.

The Flames haven't made the post-season in five years. Giordano knows many will now write them off for the playoffs because of his absence "and I hate that it's about that now."

"You just look at our team, the way we've played all year, it's been different guys stepping up on different nights," he said.

"We believe in this team and I think you saw that at the deadline," he said. "These are the guys who have sort of brought us here. I think the effort, the details will get us through."

Giordano was injured in a Feb. 25 road game against the New Jersey Devils. He was hauled down in the third period by Devils forward Steve Bernier.

"I went to take a slapshot to clear the puck," he recalled. "One of their player's sticks sort of got wedged in between my back and my arm.

"When your force is going one way and it stops abruptly, this is one of the things that happens.

Giordano participated in pre-game warmups two days later, but didn't play against the Islanders. He returned to Calgary while his team continued on a seven-game road trip concluding Sunday in Ottawa.

His rehabilitation will take four months. Giordano expects to be able to train hard in the summer and be ready for training camp next season. In the meantime, he'll spend as much time with his teammates as he can.

"At game time, hopefully I can be in and out of the room as much as possible," he said. "It's going to be really tough to watch from the sidelines. I really want to be a part of these types of games."

The 31-year-old Toronto native was having a season worthy of Norris Trophy consideration with 11 goals and 37 assists in 61 games at the time of his injury.

With their speed and agility, Giordano and defence partner T.J. Brodie generated offensive pressure at the blue-line that spurred many of Calgary's late-game heroics this season.

Their exciting style of play combined with sitting in playoff contention with just a month left in the season makes this development hard to accept for the captain.

"The timing was tough," Giordano said. "I'd say probably the toughest of my career."