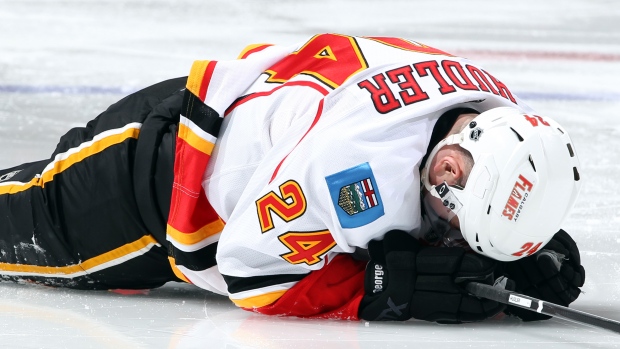 CALGARY - The Calgary Flames believe they can turn their series with the Anaheim Ducks around if they rekindle their scoring touch at home.

The Flames scored just once in two games at the Honda Centre and headed home trailing the Ducks 2-0 in the best-of-seven Western Conference semifinal.

"There are scoring chances out there," Flames head coach Bob Hartley said Monday upon his team's arrival at Calgary International Airport. "A little bit more focus, a little bit more quickness on retrieving pucks and we're going to get that red light on."

Game 3 on Tuesday and Game 4 on Friday will be the first second-round playoff games at the Scotiabank Saddledome since 2004. Game 5, if necessary, is Sunday in Anaheim.

The Ducks dominated Calgary 6-1 in the series-opener and also in the first period of Sunday's Game 2.

Above-and-beyond goaltending from Calgary goaltender Karri Ramo held Anaheim to one goal in the opening 20 minutes. The Flames then recovered to play their best periods of the series in the second and third.

So despite the 3-0 loss, which the Ducks sealed with an empty-net goal, the Flames returned to Calgary with a measure of recovered confidence.

"I though we played better in the second half, but we need to raise it a level," assistant captain Kris Russell said. "Especially offensively, we've got to get another gear here."

The plot in Calgary heading into Tuesday is whether Hartley continues to shuffle forward lines on the fly in an attempt to heat up the offence.

Calder Trophy finalist Johnny Gaudreau spent most of Game 2 on the third line alongside centre Mikael Backlund and winger David Jones before reuniting with Sean Monahan and winger Jiri Hudler in the third period.

Sam Bennett, who has Calgary's only goal so far in this series, started Sunday's game in Gaudreau's place on the No. 1 line.

"We were trying to generate some offence and get some goals," Hartley said. "This organization pays me to make decisions and I will try everything I can in order to give our team a chance to win.

"We didn't get the results, but I saw some good play from everyone."

Hartley confirmed Monday that 18-year-old Bennett will play his 10th NHL game Tuesday, which means the first year of his entry-level contract officially kicks in.

Ramo will get his second start of the playoffs Tuesday following the Finn's 31-save performance, including 19 stops in Sunday's first period.

Whoever plays on Calgary's top forward line will get a face full of Anaheim's counter unit of Ryan Kesler, Matt Beleskey and Jakob Silfverberg. That Ducks trio has been effective neutralizing Monahan's line while inflicting damage of their own.

Hudler and Monahan have a combined six shots and no goals between them, while Beleskey scored in both games in Anaheim.

The Ducks also controlled the middle lane with the exception of Sunday's second period when the Flames got speed up through the neutral zone for some sustained time in Anaheim's end.

"That's the thing with that team. You have to keep them on the outside," Kesler said. "You have to eliminate their defence."

Anaheim is the bigger, stronger and more rested team having swept Winnipeg in the first round.

Smaller, fleeter Calgary has missed the intimidating presence of power forward Michael Ferland, who was a major factor in their six-game series with Vancouver in the first round.

Ferland left in the first period in Game 1 in Anaheim with an undisclosed in injury and was a scratch Sunday.

Calgary is unbeaten in three post-season games at home and scored 14 at the Saddledome against Vancouver in the first round.

The Flames are counting on the Saddledome vibe to help them extend the series and give them another chance at that elusive win in Anaheim, where they've won just one game since 2004.

"I think we just need to relax right now and put those two games behind us and realize not many people thought we were going to be in the position we are right now," Gaudreau said.

"We just need to enjoy the moment right now, have a good time and have fun and enjoy playing hockey right now."